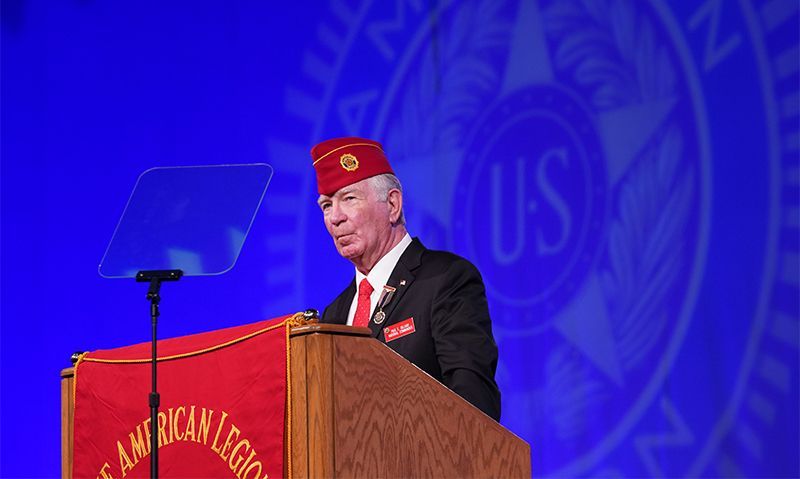 On the same stage where he was elected the 2021-2022 American Legion national commander, Texas Legionnaire Paul E. Dillard shared his theme for his year: “No Veteran Left Behind.”

And then he shared why that sentiment is so critical.

“There are many consequences for a veteran who is left behind,” said Dillard, who was elected unanimously by delegates at the organization’s 102nd National Convention. “Isolation, denied benefits, lost opportunity, lack of decent housing or employment are just a few. But the most tragic outcome for a veteran left behind is suicide. We must not let them down. Male, female, Iraq vet, Vietnam vet, Korean vet, World War II vet – it doesn’t matter. We all serve, and we must be there for each other.”

Dillard shared some statistics on veteran suicide that he researched online. “Veterans are at a 50-percent higher risk of suicide than their non-serving peers,” he said. “More than 114,000 men and women who have served in our armed forces have taken their own lives since 2001. That is nearly double the American lives lost in Vietnam. By 2030, it is estimated that the total of veteran suicides will be 23 times the number of post-9/11 combat deaths.

“Each statistic represents a real man, a real woman, and impacts thousands of real families. That is why we must, folks, we must regularly continue our Buddy Checks – not just for past and present members, but for every veteran that we know. If you have any other ideas about what we can stop these tragedies, please share those ideas with your fellow Legionnaires and members of our national staff. There are many important issues facing veterans, but no issue is more important than this: to save a life. Real stories. Real people. No veteran – and I mean no veteran – left behind.”

A Vietnam War U.S. Navy veteran, Dillard joined The American Legion in 1969 and is a paid-up-for-life member of American Legion Post 265 in Lake Kiowa, Texas. He has served in leadership roles on every level of The American Legion, including post and department commander, national vice commander, Alternate National Executive Committeeman, and chairman of the Foreign Relations Committee, the Veterans Employment & Education Commission and the Legislative Commission. He was elected as national vice commander in 2013.

Dillard said The American Legion will continue to advance the legacies of veterans “by sharing their love for this country with the next generation. We do this through our youth programs, such as Boys State, Boys Nation, Oratorical, Baseball, Junior Shooting Sports, JROTC and supporting Scouting. We also reach out directly to veterans through our Veterans & Children Foundation, Operation Comfort Warriors, National Emergency Fund, Buddy Checks and many scholarship programs.”

Dillard said when he testifies before a joint session of the House and Senate Veterans’ Affairs Committees during the 2022 Washington Conference, he wants to be able to paint a complete picture of what The American Legion does on a large scale.

“In order to give a full report in my testimony of The American Legion, we must strive for a 100-percent Consolidated Post Report,” he said. “I need to report on the hours donated, the monies raised to support our veterans and our programs. Although these are being done at the post level throughout the nation, we must complete the forms. The mission is not completed until the forms are filed.”

As for donations, Dillard said his Commander’s Project will be the Veterans & Children Foundation (VCF), which provides vital support for military and veteran parents in unexpected financial crises, and support for American Legion service officers in their efforts to obtain care and earned benefits and opportunities for disabled veterans and their families.

Dillard said his goal is raise $2 million for the VCF, but added “the monies that are raised each year for Operation Comfort Warriors, the National Emergency Fund and the Child Welfare Foundation have been very successful and need to continue to be.”

Dillard said he has conducted one-on-one Zoom meetings with each department to establish membership goals. He’s also issued another challenge: a retention rate of 90 percent for 2021 members. “We must make personal contact to our members to thank them for their continued support of The American Legion by keeping their membership current, and ask them if we can count on them this year,” he said. “Again insuring ‘No Veteran Left Behind.’”

Dillard has been married to his wife Donna since 1983. They have two children and two grandchildren – all members of the American Legion Family. Donna served as Department of Texas American Legion Auxiliary president from 2017-2018.

“It is indeed an honor and privilege to be elected as your national commander of this great organization,” Dillard said. “As we continue to build a foundation for the future, we will ensure ‘No Veteran Left Behind.”