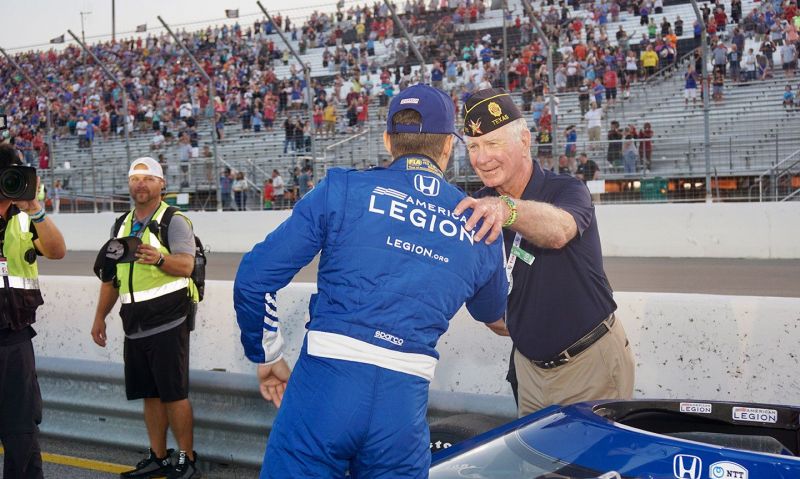 “I want to really look at that steering wheel,” said Dillard, referring to the multifunctional, computerized “brain center” of the race car. “There are more controls on the steering wheel than you can fathom.”

Typically, The American Legion livery is on the No. 48 Chip Ganassi Racing Honda featuring seven-time NASCAR Cup Series champion Jimmie Johnson on the road courses. But for five races in 2021, it was on the No. 10 Honda that Alex Palou drove to this year’s NTT INDYCAR SERIES championship.

Although on this night, Palou was involved in a crash in the race, he was able to rebound from that and close out the championship season in style over the final three races of the season.

It also gave Dillard a chance to see the potential of The American Legion’s alliance with INDYCAR, Jimmie Johnson and Chip Ganassi Racing.

“No doubt in my mind it’s a great opportunity,” Dillard told The American Legion. “Jimmie Johnson is known in the racing circles. I think he is a big plus because you say his name, and everybody knows you are talking about No. 48.

“From the folks we’ve heard from, it’s going very well. Being the first year, you still have to put the matrix together and see how it looks, but we have a lot of racing fans within The American Legion. There’s a lot of the next generation (of veterans) out there and we are hoping this helps bring them into our organization.

“I think that could have created the spike in INDYCAR interest because we have lots of members, so that will naturally spike some numbers.”

The American Legion has enjoyed increased visibility and awareness through the INDYCAR sponsorship. That can help drive additional membership from veterans and support for some of The American Legion’s most important initiatives.

“Anything that would encourage more membership or get more visibility is important,” Dillard said. “That is the key more than anything. You are going to have your ups and downs. The Wall Street Journal said in 1971 we were a dying organization; I was the young one back then and we are still here.

“As I go around to a lot of departments, I see those young ones out there. There is still plenty more room out there.

“People get busy. They have to make a living for their family. But they will come around.”

He was elected national commander at The American Legion during the organization’s 102nd National Convention in Phoenix on Sept. 2.

Under Dillard’s leadership, he wants to promote and strengthen the Buddy Check program and continue to support veteran suicide prevention.

“A lot of us really don’t talk about it. We really don’t. But when there is a problem, we need to talk about it. That is why one of our prime objectives is to prevent veteran suicide. We have a (Legion-supported) bill in Congress for the Buddy Check. If we can get that passed, it would be so advantageous.

“We do Buddy Checks within The American Legion. It’s not just for Legionnaires. If you know a veteran, call them. The isolation and time and need, the last year and a half, has been horrible for everybody because of the COVID-19 shutdown.”

The Gateway race was the first time Dillard saw an INDYCAR race in person, but he lives 60 miles from Texas Motor Speedway and has attended many NASCAR contests at that facility. When he lived in Tennessee, he saw a lot of dirt track racing.

He is already looking forward to attending his first Indianapolis 500 in person over Memorial Day weekend in 2022.

“I’ll be there next May,” Dillard promised. “It’s almost like the Kentucky Derby, (the Indy 500) is a household name and there is nothing better than celebrating it, cooking hot dogs and hamburgers. Plus, The American Legion is based in Indianapolis, and we have a post across the street from the Speedway with Post 500.

“It seems natural, and I’m really interested to see what we do, how it does and get a feel for it and where we stand.

“Seeing an INDYCAR race in person is quite an experience,” Dillard concluded. “The American Legion thinks the INDYCAR (people) are a great bunch of folks.”