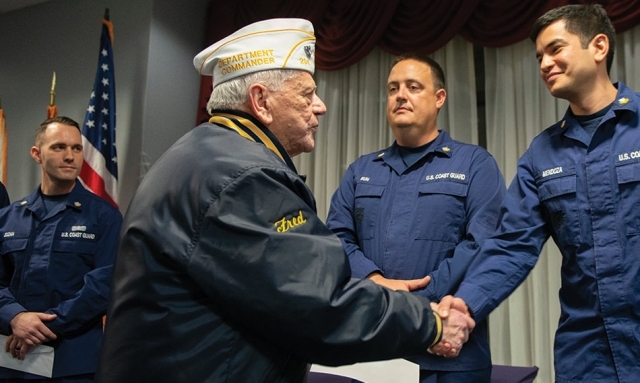 On Jan. 25, the longest government shutdown came to an end, stopping what had been more than a three-week gap since more than 41,000 active-duty members of the U.S. Coast Guard had been paid. The American Legion’s Temporary Financial Assistance (TFA) program was able to provide more than $1 million in non-repayable grants to approximately 1,713 Coast Guard families with 3,170 children.

TFA grants, like the ones distributed to Coast Guard families affected by the shutdown, are made possible through donations to The American Legion Veterans and Children Foundation at www.legion.org/donate. The foundation supports veterans and military families in need, as well as American Legion service officers who provide free VA benefits and health care assistance to veterans.

But across the nation, American Legion Family members also did their part to assist local Coast Guardsmen, raising funds, providing free meals and delivering much-needed household items and gift cards to those servicemembers. There were many Legion Family members who stepped up to help, and the following are a just a few of the many. See the entire list here.

Pennsylvania. Post 903 in Tannersville spent nearly $1,000 on clothing, toiletries, baby diapers and more for members of the Coast Guard in Philadelphia.

Washington. In Port Townsend, Post 26 hosted a meal for the crew of the U.S. Coast Guard cutter Osprey. And they have collected more than $2,000 to support the Coast Guard.