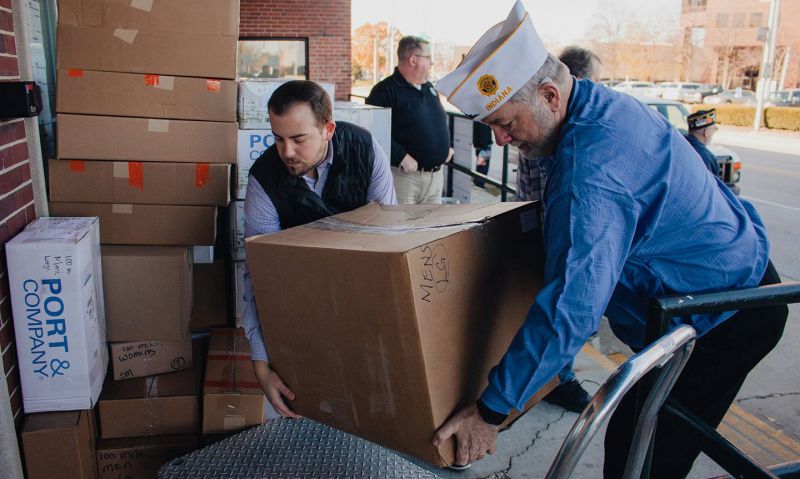 For years, The American Legion has assisted the efforts of the Indianapolis-based Hoosier Veterans Assistance Foundation (HVAF), which for nearly 30 years has assisted homeless veterans through case management, housing, employment, and its food and clothing pantries.

That assistance continued shortly before Thanksgiving, when members of the American Legion Department of Indiana showed up at HVAF’s facility to deliver nearly 1,700 pounds of warm clothing to be provided to homeless veterans throughout the winter months.

Department of Indiana Commander Mark Gullion and 11th District Ben Olsen were among  those who helped deliver the items on Dec. 24.

“They were very appreciative,” said Olsen, a member of American Legion Post 3 in Indianapolis. “It was a big donation and provide some warm clothing where needed.”

Recent collaborations between The American Legion and HVAF include:

· In February 2020, the Department of Indiana and state lawmakers came together to assemble 500 care packages filled with non-perishable food and toiletries; HVAF was one of the four shelter destinations to receive the care packages.

· In December 2020, the American Legion Department of Indiana and Indianapolis Post 522 presented to HVAF an American Legion Operation Comfort Warriors (OCW) grant worth more than $17,000 in winter gear and toiletries to help local homeless veterans during the winter months.

· In April 2021, after it was contacted by an individual wanting to donate a used vehicle, the Department of Indiana reached out to HVAF to identify a veteran in need of transportation. Such a veteran was identified; the donated vehicle helped the veteran to get to and from work, as well as see his 11-year-old twin sons more frequently.

“HVAF has an organization already set up that is extremely efficient. It’s very well known here in Marion County,” Olsen said. “There are a lot of homeless vets that are on the streets. HVAF (has) housing programs. They have food kits they give them. They have clothing kits that they give them.

“They are doing such a good job. Why wouldn’t we work in cooperation with them? That’s how I look at it. We don’t need to recreate the wheel.”