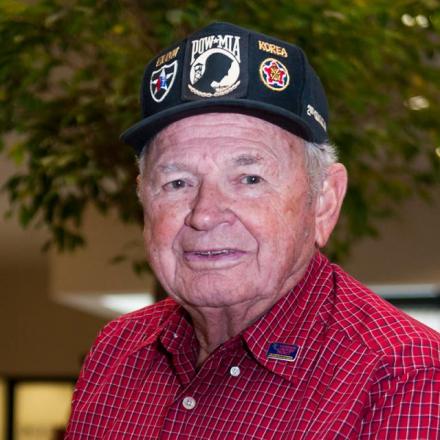 A moment of hesitation led to Arden Rowley’s capture.

A soldier with the 2nd Engineer Combat Battalion, he’d been at the front three times already. With Chinese troops blocking the 2nd Infantry Division’s retreat south through a mountain pass, Rowley’s unit was caught in the rear guard, and on the morning of Dec. 1, 1950, he and two others found themselves alone.

“We heard jabbering and saw eight armed soldiers coming up the hill toward us,” he says. “We thought they were South Koreans. They were friendly, and so it threw me off guard. When one of them reached for my weapon and pulled it toward him, I knew.”

For 24 nights, Rowley and other U.S. military personnel were forced to march northward. On Christmas, they stopped at a temporary camp that became known as Death Valley. In the following weeks, hundreds of men died from dysentery, beriberi, severe malnutrition and other diseases.

The group walked six more days to Pyoktong, where more died, including two in the room where Rowley slept.

“A fellow next to me named Tuttle had gotten pneumonia,” he recalls. “In a few days he was so weak I knew it was just about the end. I was leaning on my elbow next to him, and he was lying on his back with his eyes closed. I said a prayer: ‘Father in heaven, help Tuttle not have to suffer any longer.’ When I opened my eyes, Tuttle was looking at me, and he said, ‘Thanks, Rowley,’ and died.

“It was a real challenge to bury those men,” he continues. “The ice on the Yalu River was thick, so you can bet the ground was frozen that deep as well. We could dig a grave only large enough to place the body in and throw whatever rocks, dirt, ice and snow we could over it.

“We didn’t have to go on burial details every day because the bodies were essentially in cold storage. Every two or three days we’d go out and try our best to give decent burials to those men.”

As peace negotiations dragged on, the Chinese lectured the POWs on the glories of communism, praising Marx, Lenin, Stalin and Mao Zedong. The food got better, though. “They couldn’t afford the bad publicity the communists would get if they sent home a bunch of men whose ribs were showing.”

Rowley’s 33 months of captivity ended Aug. 18, 1953, and he returned home to Mesa, Ariz., on Sept. 7. Not even two weeks later, he met Ruth Martin at a Friday night dance, and they married that November. Starting in 1983, they attended every Korean War Ex-POW reunion until Ruth’s death in 2011.

“In a way, it’s hard to come without her,” he says. “She was a marvelous partner and companion.”

Using the GI Bill, Rowley became a teacher, working 31 years for Mesa Public Schools. In 1974, he retired from the National Guard as a major. He’s also an author; as the Korean War Ex-POW Association’s historian, Rowley has self-published five books about U.S. prisoners of war in Korea.