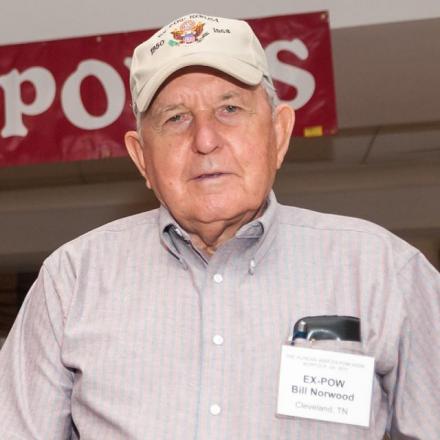 For Bill Norwood, enlisting was a matter of economics.

His dad died when he was 12, his mother and two siblings needed support, and the Army made an allotment for dependents. A country boy from east Tennessee, he headed to Fort Jackson, S.C., and then Fort Lewis, Wash., for basic training when he came of age.

“After I got there, I found that’s where I really belonged,” he says. “I had clothes to wear, food to eat, a place to sleep, and I was happy.”

Captivity took all that away.

Assigned to the 24th Infantry Division, Norwood arrived in Korea in September 1950. Though he had a rifleman’s MOS, he was assigned to drive trucks. “I thought, ‘This is a great job, back where there’s no danger,’” he recalls. “That didn’t work out.”

Six months later, on April 25, 1951, Norwood was caught in an ambush. He held on for most of a day, and made it across a rice paddy and into the woods with another soldier. They traveled that night, not even sure if they were headed south. They stopped to rest and woke up to a Chinese bayonet.

“I look at being captured not as an act of heroism or cowardice,” he says. “It’s just an act of ‘Do you want to live another minute? Another hour?’”

For a moment, fear left him. “All of a sudden the surroundings became very quiet. I saw a bright shining light in front of me, and as I walked along, I couldn’t feel the pain. It was so strange. I saw my mother, hanging clothes on the line, smiling and waving at me, and that calmed me. I assumed I’d be killed, and I wasn’t frightened anymore.

“Then I got back to reality, and I realized I was in a world of trouble.”

The march from the 38th Parallel to the camp at Ch’ang-Song took four months and covered hundreds of miles. Along the way, the prisoners’ ranks thinned for lack of food and water.

“If you’ve ever been thirsty – I mean really, really thirsty – it’s the most uncomfortable feeling,” he says. “Hunger kind of goes away, but thirst just keeps increasing.”

Norwood managed to stay on his feet, but once at camp, he grew so ill that guards dispatched him to a hut called the “death house.” There, he put his head between his knees and waited for the end.

“You want to sit here and die?” he told Norwood. “These people don’t care. It’s just a mouth they don’t have to feed. If you’ll help yourself, I’ll help you, but if not, I’m not going to waste my time.”

The camp cook, Dawson brought him charcoal from the bottoms of kitchen pots to help control diarrhea caused by dysentery, and in two weeks, Norwood was up and about.

Together they survived two years as POWs, and when buzz started to build that their release was near, Norwood and Dawson agreed they wouldn’t react when their captors announced the armistice. “We weren’t going to give them the pleasure of seeing us happy,” he says.

They were taken in groups to Freedom Village at the DMZ, and Norwood recalls being there three days – “the longest three days of my life.” At last, on Aug. 15, 1953, his name was called from a roster. He was turned over to U.S. officials, given a shower and sprayed with DDT. He returned to the United States on the same ship that took him to war: the Gen. M.C. Meigs.

His mother had only recently learned he was alive. Shortly after Norwood’s capture, she received a telegram stating that he was missing in action. Nearly two years passed before she learned he was in captivity, from one of the few letters he’d been allowed to write.

Norwood married Elizabeth, the neighbor of a fellow prisoner, and they had a son and daughter. Neither child knew of his POW experience until they were in high school.

For a long time, he didn’t talk much about Korea to anyone. Occasionally it came up during a hunting or fishing trip with Dawson, but the memories were raw even 20 years later.

Once again, Norwood finds himself in thinning ranks. He tells his story now for those who didn’t come home.

“One of my main concerns is keeping alive the memory of those we left behind,” he says. “I fly the POW/MIA flag. I’m often asked, ‘Is Bill flying a pirate flag?’ That really hurts. These were my closest friends and my buddies, and I can’t ignore them. I’ve got to keep their memory alive.”