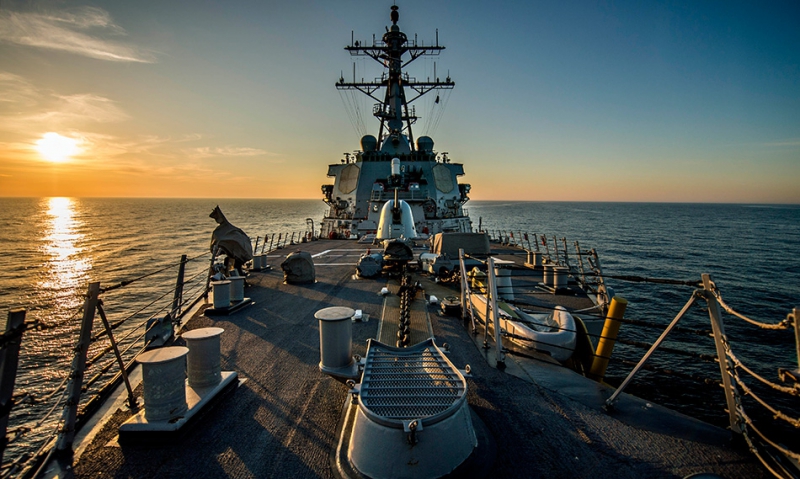 Late last year, the president and Congress codified into law plans to deploy a 355-ship Navy. But now there are worrying reports that even with the new shipbuilding plan, the Navy won’t be able to reach the 355-mark until the mid-2050s. The good news is that congressional leaders are exploring ways to remove the impediments to a 355-ship fleet – and that close allies are partnering with the United States to field a navy of navies that can fill in the gaps created by years of short-term thinking in Washington.

Before getting to the good news, it’s important to discuss why America’s navy needs to grow and why America’s allies need to play their part in maritime security – which brings us to the bad news.

Claiming 90 percent of the South China Sea based on a map drawn by Chinese cartographers in 1947, China is flouting international norms and turning reefs hundreds of miles outside its territorial waters into military outposts.

To date, Beijing has constructed some 3,200 acres of instant islands in international waters. Beijing has deployed surface-to-air missile batteries, anti-ship missile batteries and sophisticated radar systems on some of the man-made islands. One of the instant islands features a 10,000-foot airstrip – long enough for bombers and fighter-interceptors. As Pacific Command commander Adm. Harry Harris concludes, these islands “are clearly military in nature.” He adds that the Chinese “have seven new bases in the South China Sea.”

Related, China will deploy 73 attack submarines, 58 frigates, 34 destroyers, five ballistic-missile submarines and two aircraft carriers by 2020. Beijing’s goal: to control the resource-rich South China Sea and muscle the United States out of the Western Pacific. As Prime Minister Shinzo Abe of Japan puts it, China is trying to turn the South China Sea into “Lake Beijing.”

Thousands of miles away, Russia is making outlandish claims in the resource-rich Arctic. Moscow lays claim to half the Arctic Circle and the entire North Pole – some 463,000 square miles of Artic sea shelf – disregarding the claims and territories of other Arctic nations such as the United States, Canada, Denmark, Norway and Iceland.

Like Beijing, Moscow has underlined its claims in a brazen military context: In 2015, Russia conducted a huge Arctic military exercise involving 80,000 troops, 220 aircraft, 41 ships and 15 submarines. Russia has stood up six new bases north of the Arctic Circle, opened/reopened 16 ports and 13 airfields in the region, and deployed sophisticated S-400 surface-to-air missile batteries in the Arctic. Moscow plans to have nine airfields operational in the Arctic by the end of this year.

Finally, there’s the lingering problem of piracy. Although pirate attacks are down from their highpoint in 2009-2011 – a three-year span that saw an average of 431 attacks per year – there have been an average of 243 attacks annually over the past several years. Importantly, those numbers fell due to a concerted, coordinated response from Western naval forces.

This list of maritime challenges explains why Adm. Mike Mullen promoted the “thousand-ship navy” concept during his tenure as chairman of the Joint Chiefs of Staff. “The United States Navy cannot, by itself, preserve the freedom and security of the entire maritime domain,” he explained. “It must count on assistance from like-minded nations interested in using the sea for lawful purposes ... Because today’s challenges are global in nature, we must be collective in our response ... As we combine our advantages, I envision a 1,000-ship navy – a fleet-in-being, if you will, made up of the best capabilities of all freedom-loving navies of the world.”

Although some have dismissed the idea, the reality is an ad hoc navy of navies – enfolding the combined seapower of the United States and allies in NATO, Japan, Australia, South Korea, India and other partners – is doing much to police the seas and promote maritime security:

• Formed in 2003 by 11 allies in North America, Europe, Asia and the Pacific, the Proliferation Security Initiative today enfolds dozens of seafaring powers that collaborate “to stop trafficking of weapons of mass destruction, their delivery systems, and related materials to and from states and non-state actors” – by force if necessary.

Indeed, several key partners have joined the United States in its efforts to defend freedom of navigation and freedom of the seas against China’s lawlessness. Japan is expanding its naval activity in the South China Sea by conducting joint patrols with the U.S. Navy as well as multilateral exercises in waters China claims.

British Defense Secretary Gavin Williamson recently announced that the frigate HMS Sutherland will “be sailing through the South China Sea and making it clear our navy has a right to do that.” Asked about U.S. freedom of navigations operations (FONOPs) in the region, Williamson said, “We absolutely support the U.S. approach on this ... We’ve got to ensure that any form of malign intent is countered.”

Australia conducts air patrols over the South China Sea to ensure freedom of the seas and skies. RAAF Air Marshal Leo Davies says his nation “will work closely with our allies, partners and other like-minded air forces to determine how we can make a practical contribution to ensuring freedom of navigation.”

“Several times per year, French navy ships cross the waters of this region, and they’ll continue to do it,” French Defense Minister Jean-Yves Le Drian told attendees at a recent Asian security conference, adding that France is committed to “sailing its ships and flying its planes wherever international law will allow, and wherever operational needs request that we do so.”

In addition, during the campaign against ISIS in Iraq, the French aircraft carrier Charles de Gaulle served as a command center for the multinational anti-ISIS task force.

However, that’s just the tip of the iceberg. A U.S. Naval Institute (USNI) symposium of naval commanders underscores the breadth and depth of international contributions to maritime security – and the reach of this “navy of navies.”

The German navy, for example, contributes to NATO’s Standing Naval Forces, the EU’s maritime training and counter-smuggling operation in Libya, and the EU’s counterpiracy operations off the Horn of Africa. A German frigate is deploying this year with the USS Harry S. Truman carrier strike group.

The Italian navy is participating in the EU’s maritime operations off the coast of Libya and Somalia, as well as NATO’s Operation Sea Guardian, which conducts FONOPs, maritime interdiction, counterproliferation and counterterrorism.

None of this is to suggest that the United States should be content with the current size of its Navy. As leader of the West, America needs to do its part by recapitalizing the fleet.

These numbers aren’t even close to America’s maritime needs. “For us to meet what combatant commanders request,” according to former CNO Adm. Jonathan Greenert, “we need a Navy of 450 ships.” Testimony before Congress reveals that in 2007 the Navy had the resources to meet 90 percent of combatant commanders’ requests. By 2014, that number had fallen to just 43 percent. A government-funded study concludes that the United States needs 14 aircraft carriers (the Navy has 10 active), 160 cruisers and destroyers (the Navy has 84), and 72 attack submarines (the Navy has 52).

These gaps have real-world implications: After Tehran threatened to close the Strait of Hormuz in 2012, Central Command requested an extra aircraft carrier to send a strong deterrent signal. That request was denied because the carrier was needed in the Pacific. When the Obama administration ordered warplanes from USS George H.W. Bush to blunt the ISIS blitzkrieg in 2014, Greenert admitted that “they stopped their sorties” over Afghanistan to do so. Similarly, the Trump administration’s apparent sleight-of-hand with USS Carl Vinson during the North Korea crisis in spring 2017 – trying to make one carrier do the work of two – underscored that the United States doesn’t have the carrier firepower it needs to dissuade foes and reassure allies. Finally, the Coast Guard deploys only two operational Arctic-capable icebreakers – one a medium-duty vessel tasked largely to scientific missions, the other an antique that has exceeded its 30-year lifespan. By comparison, Russia has 40 icebreakers, with another 11 in production.

“The Navy shipbuilding plan that doesn’t get to 355 ships until the mid-2050s is unacceptable,” argues Sen. Roger Wicker, R-Miss., chair of the Senate Armed Services seapower subcommittee. Although the current plan rapidly expands the fleet’s numbers to 326 ships in the next five years, it stalls in year six. “Suddenly there’s a dip,” Wicker explains. “We don’t like the dip.” So, Wicker is pushing the administration and his colleagues for increased funding “to speed up the production pace,” as USNI reports.

As the Navy copes with the consequences of years of underfunding at home and braces for years of multidimensional challenges abroad, waiting until the mid-2050s to deploy a 355-ship fleet is the very definition of too little, too late. The solution is more resources for America’s navy and more help from America’s allies.