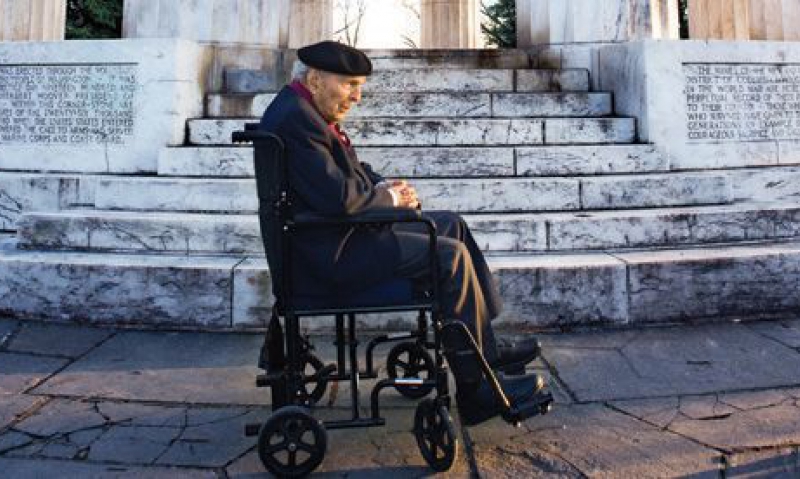 In 2008, I joined a group of American Legion National Headquarters staff – primarily veterans of Iraq and Afghanistan – for an unforgettable trip to visit Frank Buckles, last living U.S. World War I veteran. The moment we arrived at his home in Charles Town, W. Va., we realized the significance of our meeting and the bond we share.

Mr. Buckles’ daughter, Susannah, welcomed us and showed us around their home. Mr. Buckles, sitting in his chair, soon regaled us with stories from World War I and his service in England, which brought him to France where he drove ambulances during the Great War. It was supposed to have been the war to end all wars. At 107 years old, Mr. Buckles was very articulate in his speech and recollections. It came as no surprise to me that he lived until Sunday, Feb. 27, when he passed away at age 110.

During our visit, Mr. Buckles showed us a medicine ball from the naval ship that took him over to France. He shared several pictures from his days in the service. He explained to us that the same ship that took him to war, the Carpathia, had rescued the Titanic survivors in earlier years. Buckles also told us about his brief encounter with Gen. John J. Pershing, General of the Armies and an honorary National Commander of The American Legion. Pershing was a member of The American Legion Department of the District of Columbia’s George Washington Post 1, which is the post I belong to. It was revitalized in 2006. The highlight of our visit was presenting Mr. Buckles with his 75-year membership plaque in The American Legion. Shortly after our visit, Buckles was invited to the Pentagon to be recognized and honored as the last living U.S. World War I veteran and for his continuous efforts to see the rebuilding of a World War I Memorial on the National Mall. He lived long enough to see great progress in the project, which the Legion has supported.

It was a great honor for our group of Gulf War, Iraq and Afghanistan veterans to meet the last living U.S. World War I veteran. No matter which generation serves in the military, what remains the same is our common bond of military service. We honor Frank Buckles and his generation, which founded The American Legion in 1919.

Mr. Buckles, throughout our conversation, illustrated the meaning of connection among the war eras. He spoke of his comrades of the past, of World War I and of World War II, in which he was a civilian taken as a Japanese prisoner. As he remembered his comrades from the past, we remember him and those of his war era.

On behalf of my colleagues in The American Legion and among those with whom I have served, I salute Frank Buckles. The impression he left on us will never be forgotten.