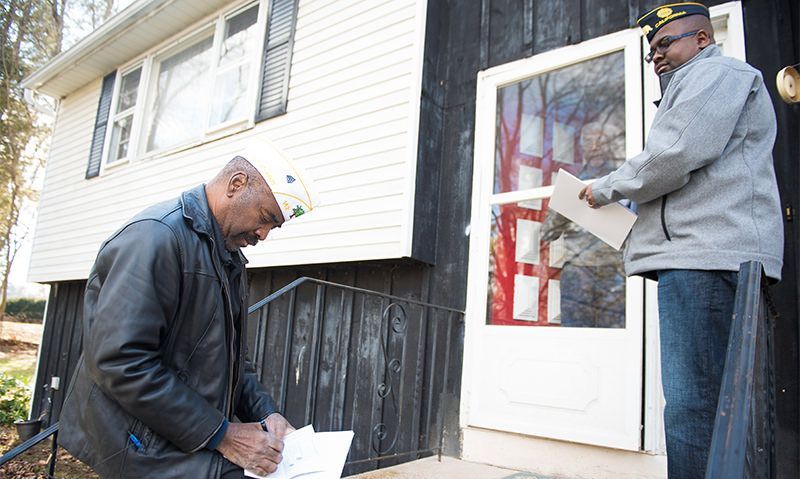 With President Trump’s signature on the LEGION Act, the extension of the ongoing declared period of war was extended back to Dec. 7, 1941. The congressionally approved act is a way to honor thousands of veterans who were killed or wounded on duty during periods not previously considered a time of war.

“Finally Congress has acknowledged the service and sacrifice of at least 1,600 veterans who died or were wounded in previously undeclared periods of war,” said American Legion National Judge Advocate Kevin Bartlett. “This new law honors the memories of those veterans while allowing other veterans from those previously undeclared eras to receive all the American Legion benefits they have earned through their service.”

The LEGION Act - Let Everyone Get Involved in Opportunities for National Service Act — also redefines The American Legion’s membership eligibility dates. The eligibility now span from Dec. 7, 1941, until a time when the U.S. is no longer at war, as determined by Congress.

Question: How does this change the eligibility requirements for The American Legion?

Question: What’s the impact on veterans who previously were not eligible for American Legion membership?

Answer: Veterans who were honorably discharged but whose service did not fall into the previous defined war eras may now join The American Legion immediately. To do so, eligible members may sign up at www.legion.org/join.

Question: I am among the veterans who were not allowed to join previously, so why do you want me now?

Answer: The American Legion’s founding fathers believed, “a veteran is a veteran,” an axiom that has held true throughout the organization’s more than century of service. Some veterans were ineligible to join because of the war eras that were defined by Congress. The recent bill passage and president’s signature changed that.

Question: So how does this differentiate The American Legion from AMVETS?

Answer: The American Legion’s eligibility criteria states that veterans must have served during “wartime.” When Congress decides the U.S. is no longer in a state of war, the Legion’s membership eligibility period will close, while AMVETS will still be open to those who served.

Question: How does this affect the Sons of The American Legion (SAL)?

Question: How does this affect the eligibility for the American Legion Auxiliary?

Answer: This follows the same concept as the SAL, as noted previously. Membership in the American Legion Auxiliary is currently open to grandmothers, mothers, sisters, spouses, and direct and adopted female descendants of eligible veterans. (Editor's note: At the time of the LEGION Act's passage, the Auxiliary membership was only open to those noted above. About one month later, the NEC approved a measure changing the Legion's constitution and bylaws to replace "wives" with "spouses," opening the door for men to join the Auxiliary.)

Question: How does this affect membership for departments, districts and posts?

Answer: This change opens up American Legion membership to thousands more veterans who likely live in your communities. They may become members immediately.

Question: The current membership applications don’t address the eligibility change. How do we process those members?

Answer: New membership materials will be developed and provided as quickly as possible. Until then, it is recommended that prospective members from a previously undocumented war era write “Other Conflicts” in the eligibility date section and send it in to their department with the appropriate dues.

Question: What steps should departments, districts and posts focus on?

Answer: A good first step would be to review all recruiting materials to look for eligibility dates. Information on electronic media (websites, social media channels, etc.) should be changed immediately. It is up to departments to decide on the best way to handle printed materials, while updated ones are being produced.

Question: How does this change the Paid Up For Life program?

Answer: There are no changes to the PUFL program, though the newly eligible members would be able to become PUFLs. To learn more about the program, visit https://www.legion.org/PUFL

Question: Who can I contact for more information about this change as it applies to membership and recruiting?

Answer: Contact the national Membership Division. Visit this web page to find the representative in your state. https://www.legion.org/membership/contactus