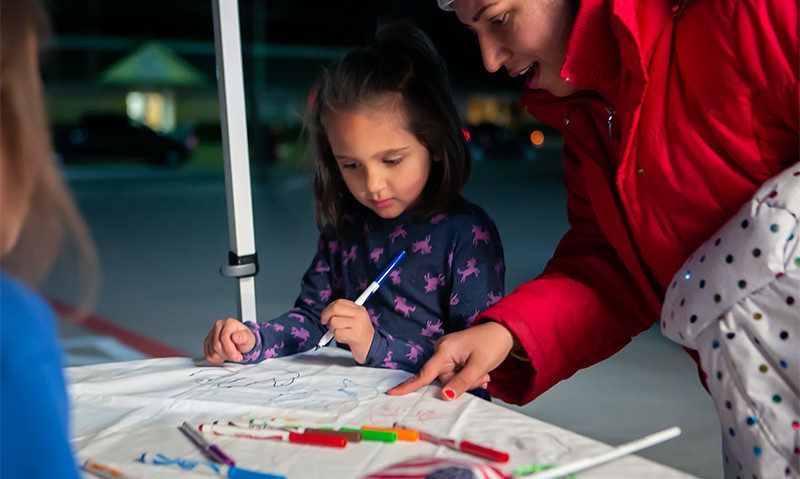 In just a few years, American Legion Post 100 in Royse City, Texas, has integrated itself as a major player in its community, about 50 miles east of Dallas.

“It’s about us giving back. We love Royse City and Royse City loves us,” founding post Commander Jason Castleberry said, noting that the post does not have a building. “We have to be out in the community so they know we exist. The great thing about our post is that our members aren’t joining because they need a place to hang out. They are joining to make a difference, to work a program, to do Boys State, to be in the Riders group. They all have that same sense of purpose that I have. It’s refreshing to see.”

A recent Saturday, Nov. 16, was indicative of the community service provided by Post 100 members, including Castleberry. That evening post members led the community’s Veterans Day celebration.

Castleberry served as the emcee while the post chaplain led the community in a prayer. The Military Heritage Collection of North Texas, a museum in the adjacent town of Nevada, brought out military vehicles for kids to explore. Food trucks fed attendees, two bands played for the crowd and post members engaged kids with other fun activities such as comic books.

Earlier in the day, Post 100 members delivered turkeys and side dishes to a church for distribution this Thanksgiving to needy families. Castleberry noted that it is not only important to do projects under the Four Pillars but to share those with the community.

“You can do all these great programs and help many people but if you are not letting people know, it’s just going to stay within you,” he said. “Every time I get the opportunity to tell people about The American Legion, I take that opportunity. I want them to know what The American Legion is all about. We’re not your old-school Legion. We’re a young vibrant organization that is working to change people’s lives.”

That approach was the selling point for Shawn Masters, the post’s judge advocate. Masters had belonged to another veterans service organization during his time in the Army.

“Upon exiting the military, I was looking for an organization that I could volunteer with because it’s what my family does,” said Masters, a post 9/11 veteran who was post commander last year. “When Jason approached me about it, he told me they don’t have a building, or have a bar. We’re all about programs. We’re all about community. We’re all about veterans. That’s what inspired me to jump on board with Post 100.”

“Boys State is a very huge deal for me because we can inspire the next generation of youth to be our leaders,” he said. “I have three kids myself and getting them ready for the world is something that is very important to me and dear to my heart.”

It was three years ago at the Royse City Veterans Day event when Castleberry and others launched an effort to create a post. On that day, they signed up enough veterans to start the process of receiving their charter.

And Post 100 hasn’t stopped growing – or serving its community – since.

“It just snowballed from there,” Castleberry said, adding that the post hit 67 members in two years and is approaching 95 members now. “It’s been a blessing. We have been able to make a big difference.”

“For 75 years there was no veterans service organization in this community to support veterans until we came along,” Castleberry said. “It’s been a big deal to help the veterans, community and children, as The American Legion does.”

Launching Post 100 was part of an initiative by then Department of Texas Commander Walter Ivie who encouraged districts to look for gaps and fill them. As the state’s population continues to sprawl outward from big cities, there are opportunities to create new posts to serve those populations.

“Texas is a huge state so being able to start these posts is really what is going to be able to take our membership to the next level,” Ivie said. A lot of these posts that have been around for 100 years are going to stay where they are with their membership. But for these posts in areas where the population is growing, it’s going to bring in 100, 200 members really quickly. These new posts are really growing.”