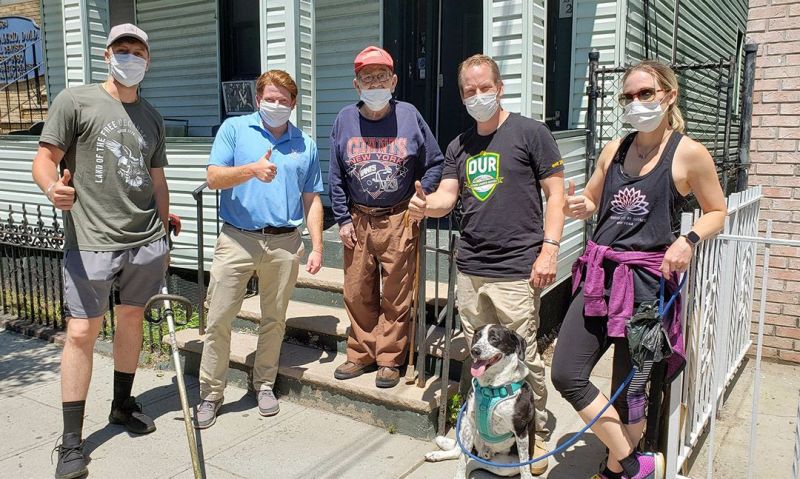 Well before the coronavirus pandemic hit the nation, American Legion Post 18 in Weehawken, N.J., was performing Buddy Checks on its members – particularly the older ones. That’s how members of the post spent Veterans Day 2019.

But as social distancing and stay-at-home orders became the norm, reaching out to those isolated veterans became even more important to members of the resurgent post driven by post-9/11 members.

“So we check in on them fairly regularly. Give them a call – a very simple ‘hey, how are you doing?’ They tell their same old three stories over and over. You listen to them. Every now and again you bring a new person that hasn’t heard the story before. It shows … that there are people out there who care.”

Post members are reaching out via the telephone first to make sure it’s OK for an in-person visit. The most recent Buddy Check occurred in person when a handful of the post’s members visited World War II veteran Ernie Troisi, whose wife passed away in 2019. Troisi has lived in the same house in Union City since birth.

There, the post members were able to visit with Troisi, as well as help him with some work around the house and yard. “He’s pretty self-sufficient, but he just knows his physical limits,” Page said. “He doesn’t trust himself climbing up on his roof to clean out the gutters.”

Page said Troisi’s family lives pretty far away and have been unable to visit him very often. “It’s much more important for us to go give him a good Buddy Check and see that he’s OK,” Page said. “I’ll text his daughters as well, saying I’m checking on their father. They’re really happy about that.”

In Alabama, Department Adjutant Greg Akers said Buddy Checks happen throughout the department every other week. Meanwhile, Alabama Department Commander Ron Bradstreet has made an effort to contact every post in the state and has been successful reaching most of them.

“I think that Buddy Checks are important,” Bradstreet said. “Before it even became a thing, a lot of posts did that already. My post (Ryan Winslow American Legion Post 911 in Hoover), once a month they call on the World War II and Korean War veterans. Phone calls are very important. Email is important. Social media’s important. But when you get that phone call, that personal touch becomes very important.”

Bradstreet said the coronavirus made Buddy Checks even more important. “I wanted to reach out to every post commander in the state and see how they’re doing and how their leadership is doing, and to encourage them to contact all their post members,” he said. “That’s why I did it: to make sure that I was checking on them.”

Seeing how the American Legion Family has rallied for its communities across both his state and across the nation hasn’t surprised Bradstreet. “That’s what we’re supposed to be doing,” he said. “We’re supposed to be serving. If you’re in this business for the right reasons, that’s just what you do.”

And in Maryland, Boonsboro American Legion Post 10 Commander Gary Shank has used both the post’s Facebook page and local media to urge residents to keep tabs on fellow veterans, neighbors and friends through emails, phone calls and letters. Shank also has put his email out there to let any veterans needing assistance know that they have someone to contact.