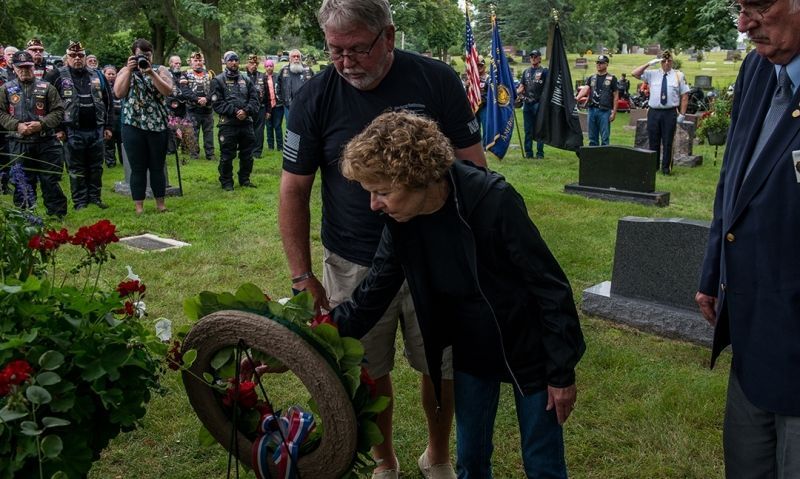 One of the most moving experiences of the 2018 American Legion Legacy Run stop in Albert Lea, Minn., was when more than 200 American Legion Riders stopped at Graceland Cemetery to pay their respects to U.S. Army Chief Warrant Officer 3 Corey Goodnature.

The chief lead pilot of a Chinook helicopter, Goodnature was killed on June 28, 2005, when his aircraft was hit by Taliban and Al-Qaeda fire while attempting to assist a Navy SEALS team under intense fire in the mountains. Goodnature, seven other crew members and eight Navy SEALS were killed when the helicopter crashed. On Aug. 21, 2018, the Legion Riders watched as Goodnature’s parents, Don and Debbie, placed a wreath at his grave.

The ceremony left many Legion Riders with tears in their eyes, which again likely will be the case during this year’s Legacy Run stop in Waycross, Ga., on Aug. 18. There, the Riders will attend a similar wreath laying to honor U.S. Army Sgt. Chad M. Mercer, who was killed during combat operations on June 30, 2005, in Baghdad. Mercer’s mother, sister and son will attend the ceremony, as will members of the community and local officials; a visit to American Legion Post 517, and a ceremony and dinner will follow at the Historic Passenger Rail Depot in Waycross.

The stop in Waycross is one of the many highlights of this year’s Legacy Run, which will leave American Legion Post 347 in Lady Lake, Fla. – the world’s largest Legion post – on Aug. 18 and arrive in Indianapolis on Aug. 22 for the 2019 American Legion National Convention. Along the way, the ride will make stops in Georgia, North Carolina, South Carolina, Virginia, and Kentucky, before ending up at Kenneth N. Dowden Wayne Post 64 in Indianapolis.

This year’s ride will include stops at lakeside posts in Gainesville, Ga., and Spartanburg, S.C.; a lunch stop at Cumberland Bowl Park in Jonesville, Va.; a dinner stop at Wildcat Harley-Davidson in London, Ky.; and a lunch stop at Post 9 in Madison, Ind., before the ride comes to an end in Indianapolis. On some stops, smaller flights of Legion Riders will visit American Legion posts in the area that are not scheduled for stops by the larger Run contingent.

American Legion National Commander Brett Reistad will accompany the ride, and in fact is getting his ride to the American Legion World Series via the Legion Riders. The Run will stop in Shelby, N.C., on Aug. 20 for an afternoon parade in downtown Shelby, and afterward Reistad will be taken to Keeter Stadium for the ALWS championship game.

Two events will take place in Florida prior to the departure of the ride. From 4 p.m. to closing on Friday, Aug. 16, Gator Harley-Davidson, 1745 US-441, Leesburg, will have bike and rider accessory vendors, food vendors and a live band. All proceeds will be donated to the Legacy Fund.

And Aug. 17 will be a full day at Post 347. Ride registration is from 8 a.m.-4 p.m.; all participants must report to the registration tables for additional Run materials, wristbands, and to sign final waiver documents. All riders must check in with completed emergency medical forms.

American Legion Emblem Sales will be set up from 8 a.m.-7 p.m., selling a large assortment of American Legion Family merchandise and taking catalog orders. Various rider briefings will take place, food will be available to purchase from noon-2 p.m., and the All-Riders Safety Briefing will take place from 4-5 p.m.

Post 347 will provide a spaghetti and meatballs dinner, which will be followed by the Run’s opening ceremony. Sussan urges all participants to arrive at Gator Harley-Davidson Lady Lake Post 347 as early as possible on Friday and Saturday.

Sussan said Margaret Abbott – the widow of American Legion Rider and 11-time Legacy Run participant Verlin Abbott, who was killed in a motorcycle accident while providing a funeral escort in Indianapolis two weeks before the 2017 Legacy Run – is sending some of Verlin’s riding gear to Post 347 for anyone who can use it.

“Rain gear, gloves and helmets – they’re going to be delivered to Lady Lake and we’re giving them away to the Riders,” said Sussan, who in the past few years had planned the ride with Verlin. “So that’s going to be with us on the ride. And (Verlin’s brother Von) is going to join us on the last gas stop going into (Indianapolis).”

The ride raises money for The American Legion Legacy Scholarship Fund, which provides college assistance for the children of U.S. military personnel killed on active duty on or after Sept. 11, 2001, as well as children of post-9/11 veterans with a combined VA disability rating of 50 percent or higher. The 2018 Legacy Run raised a record $1,300,804 for the fund, the fifth-straight year the ride has raised more than $1 million. The American Legion Department of Minnesota led the way, donating $251,000 during the national convention in Minneapolis, while the departments of Missouri ($93,324), South Carolina ($65,204), Florida ($57,005), Wisconsin ($45,439), and Kansas ($27,717) were top contributors.

A reminder that pre-payment for fuel and meals is mandatory, in order to avoid dealing with cash on organized fuel stops and to be able to properly advise meal locations how much food to prepare.

For those wanting to support the Legacy Run but are unable to participate, online registration for supporters will continue indefinitely. Supporter registrations of $25 or more will also receive a thank-you package while supplies last.