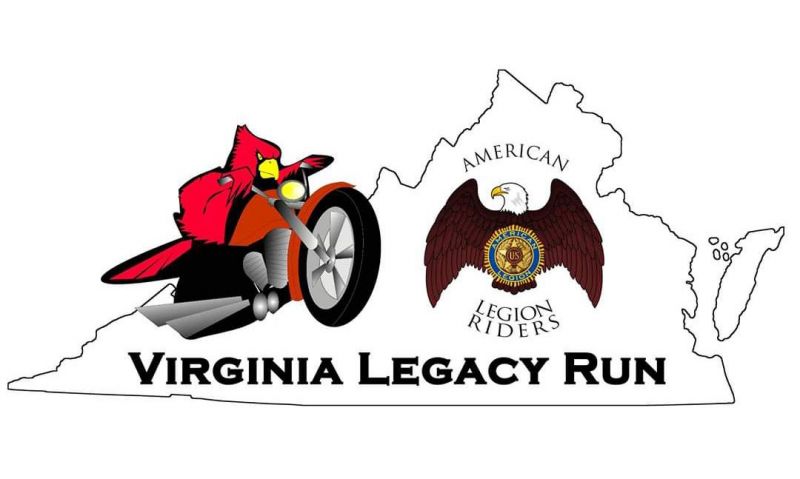 For years, Department of Virginia American Legion Rider Randy “BB” Gunn would go on the annual Legacy Run. But when it came time to present a check along the way, Gunn said he felt like he wasn’t doing enough.

“For my first 10 years on the Legacy Run, I was just able to bring whatever (amount) from my own post,” said Gunn, a member of American Legion Post 284 in Colonial Heights and Virginia’s Eastern Region ALR director. “I kept wanting to do something.”

That something was the Virginia Legacy Run, which Gunn founded in 2018 and now serves as its chairman. He hoped to raise $5,000 the first year, but the ride brought in $25,000. Over the past four years, Virginia’s in-state ride has delivered $130,000 to The American Legion Legacy Scholarship Fund, including $43,000 a year ago.

“I want to say that people are starting to trust in us, if that makes sense,” Gunn said. “They’re starting to think ‘my friend from my post is giving $500, so I can whatever dollar amount I can give.’

“We’re bringing awareness not only to the cause, but to the fact the Riders are out there being couriers of the funds, rather than just mailing a check in. And people take that with their heart. The camaraderie of getting together The American Legion/veterans together for a cause is turning out to be awesome. And the money donated from (an American Legion Family member) stays in The American Legion (through the Legacy Scholarship). That’s crucial.”

Registration already is under way for the 2022 Virginia Legacy Run, which will take place June 23-25. A year ago, the ride had 210 registrants. “I promote the ride that they don’t have to go all three days,” Gunn said. “They can just go one leg, or two legs – whatever fits their schedule.”

As with other in-state Legacy Runs across the country, the Virginia ride draws Riders from other American Legion departments. Gunn said he’s shipped ride coins and shirts to people from seven or eight other states. “Some are just coin collectors, but most of the guys are ones that ride with us on the national (Legacy Run),” he said. “From a riding point this year, when I did my Zoom meeting on Jan. 9, I had one person that was in Germany that (participated). I had two in Florida and two in Tennessee.”

Now, Gunn said, people are asking about the next state Legacy Run shortly after the previous one ends. “Year-round, people are bugging me about ‘when’s the ride? What’s the route? What color is the T-shirt going to be?’  It’s attracting attention. And it makes me feel good because some of these people that will never go on a national (Legacy Run) are able to kind of participate in the national run because they’re participating in Virginia. And I promote it as this is just another steppingstone to get the money to the national commander.”

Six of the past seven actual Legacy Runs raised more than $1 million each; the 2020 ride was cancelled because of the COVID-19 pandemic, but Riders and other American Legion Family members still were able to raise more than $558,000.

Those numbers are due in no small part to the efforts at the department level, with more and more states conducting their own in-state rides each year. West Virginia had their inaugural state ride last year, while other departments continued to raise thousands of dollars through their own versions of the Legacy Run.

When departments were in the midst of staging in-state Legacy Runs last summer, National American Legion Advisory Committee Chairman Mark Clark praised their efforts. “I couldn’t be prouder of the resilience of the Riders across the country,” Clark said. “I tip my cap to the Riders of every department that hosted a legacy ride so far this year and wish all others planning one great success. Riders always answer the call and put their passion for the children to work each and every year, and it makes my heart swell with pride.”