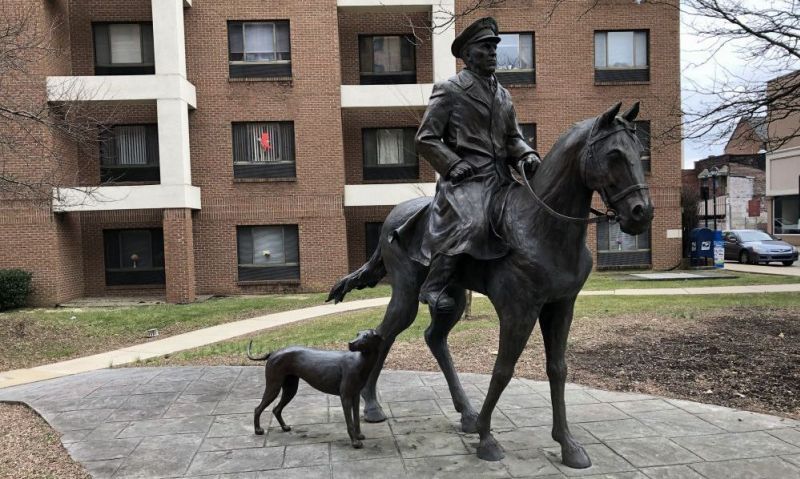 Now in its third year, The American Legion’s Memorial Database continues to identify, collect and document veterans monuments and memorials all over the world. Contributors to the project range from American Legion Riders and Legion College graduates to local historians, but most are individuals who have a passion for preserving history.

To date, the database’s top contributor is Robert Domenick, historian and chaplain for Sons of The American Legion Squadron 344 in Jeannette, Pa. Since 2017, Domenick has submitted 360 of Pennsylvania’s 509 listed memorials. He recently spoke with The American Legion Magazine about his ongoing search for local memorials.

When did you hear about the memorial project?

I received an email from the Legion in 2017 saying it was building a national database of memorials. One of our core things as chaplain is to remember our former members and associations in all wars. That’s in our preamble. I thought it would be a great project, so I went out and found about six memorials located around the city of Jeannette. The first one I submitted is right in my neighborhood on the south end of town, in Lincoln Heights. I thought, “Let’s keep doing it,” and I’ve never stopped.

How do you locate memorials?

I just look in areas where I haven’t been. Some I submit are big ones with development money from the state, where they hired architects and raised hundreds of thousands of dollars, but some are small places that would place a monument and or a stone donated. It’s important they be preserved and there for future generations.

In what unusual places have you found memorials?

Guffy and Shaner were little coal-mining towns that don’t exist anymore. They were washed away by floods in the 1950s. But their monument was on higher ground and is still there. Another one is in our courthouse, in sort of an attorney’s lounge. They put up an honor roll list of all the members of the Westmoreland County Bar Association who served in World War I, 28 lawyers out of 105 or 110 people.

Of the memorials you’ve documented, which do you think are most unique?

The Archie Mathies Gold Star Memorial in Library, Pa., is for a Medal of Honor recipient. Mathies served on a B-17 in World War II. He was not a pilot, but their plane was shot up and the pilot was injured. Mathies took control and flew hundreds of miles back to England. He was ordered to bail and leave the pilot, but he wouldn’t do it. On his third attempt to land the plane, it wrecked, and he was killed.

Another unique memorial I sent recently is the General Marshall Equestrian Statue in Uniontown, a life-sized statue of George Marshall on his horse with his dog. That was different.

When did you join the SAL?

Back in 2009 or 2010, I took my mom to a concert at the Legion hall in Jeannette, and there was this photo of the charter members of the Sons of The American Legion squadron. I had never heard of the SAL but found out I could join, as my dad was a veteran and my mom’s father was a World War I veteran. My dad was in the submarine service, and was in basic training when World War II ended. He was assigned to to the Pacific fleet, USS Cabezon. My maternal grandfather also served in the Navy on an armed merchant ship, USS Sudbury. He was a gunner’s mate. My father and grandfather were members of Post 344.

What advice would you give to people interested in submitting memorials?

Do it. You might enjoy it. It’s fun. Even if you just cover your community or your county, America is a big place and has lots of memorials. Take pictures from different angles. There’s nothing to it but to do it.

The American Legion’s Memorial Database contains more than 2,800 memorials from all 50 states and more than a dozen foreign countries. Search by location or keyword, and learn how to upload photos and other information about local memorials.

Save
Tags: Sons of the Legion, Honor & Remembrance