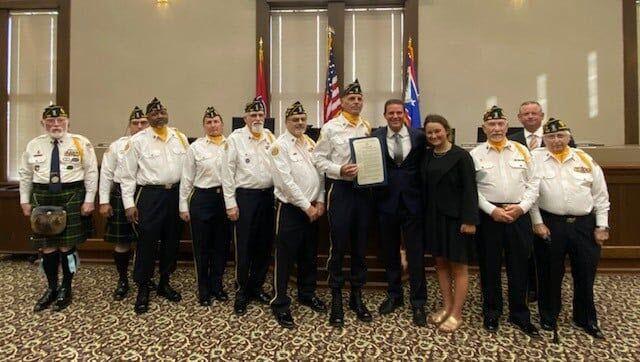 During the COVID-19 pandemic, funeral services and visitations were canceled at times, or at least restricted by the number of people who could attend the service of the person who died, which placed an emotional hardship on grieving loved ones.

While the families of Montgomery County veterans who died had to do without many people in attendance at funerals, the military tributes continued throughout the year at gravesides, thanks to a local American Legion post that continued to honor the veterans who were lost.

The commissioners honored the rifle team with a standing ovation as it was recognized for the commitment of its members who helped provide full military honors to veterans throughout the COVID-19 pandemic.

From January 2020 through June 2021, Post 289 volunteered 417 hours and performed 32 full-military-honors funerals, spending countless hours training, volunteering and putting veterans before themselves, according to Durrett.

According to the proclamation, Durrett said Congress chartered The American Legion in September 1919 as a patriotic veterans organization devoted to mutual helpfulness, programs and service to veterans, veterans’ families and communities.

“The American Legion Post 289 rifle team of Clarksville, Tenn., has honored the patriotism of veterans throughout Montgomery County,” Durrett said. “The Post 289 rifle team continues to promote peace and goodwill all while maintaining their core principles of justice, freedom and democracy.”

Post 289 is commanded by David Zeveney Jr. and is under the directive of sergeant-at-arms Bob Sisson.
Zeveney said in an interview the rifle team renders a 21-gun salute at the graveside service of veterans, folds the American flag and presents it to the family and then sounds taps.

David Zeveney and his wife, Billie Zeveney, both members of the rifle team, help fold the flags during the services.
“It still gets me every time,” David Zeveney said. “It just breaks my heart. It’s very difficult when we lose a brother- or a sister-in-arms. It’s really a privilege to do this.”