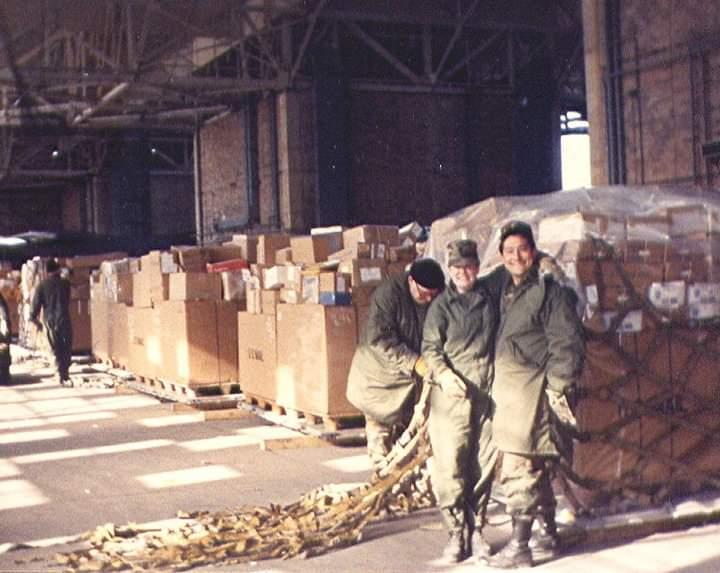 I spent three years stationed in Frankfurt, Germany, in the 1980s when 60,000 troops were stationed in that city alone. I was an Army postal clerk and it was a blast as far as the military goes. All the mail sent from the States to troops and families in Germany went through 228 Postal Co. I had every APO in West Germany memorized. We were a 24/7 unit, like the medics and MPs, so all our barracks were at Gibbs Kaserne, near 97th Gen Hospital. I was saddened when I went back in 2006, after the troop withdrawal. The grass was overgrown and the eagle statue on the mess hall broken. It was good to see the schnell imbiss on the corner still selling currywurst and libations!
I thought I’d seen the last of active duty when I left Germany in 1988, but on Dec. 2, 1990, during my 3-year Army Reserve commitment, I was reactivated for Desert Shield/Storm. After getting all the required shots, new uniforms, dropping out of my college classes and saying goodbye to loved ones, I was flown to Ft. Dix, NJ, where all troops going to Saudi Arabia were sent first.
Once we arrived, my unit was asked to help the Air Force at neighboring McGuire AFB before we left. Literally, tons of mail was piling up in semi-trailers and in a hangar called Big Blue. Sorting and securing the mail to pallets was meant to be a temporary gig before we headed over to the sandbox, but the mail never stopped! Americans were incredibly supportive of the troops, and as the sister of two Vietnam vets, it warmed my heart. I was humbled to be part of this amazing attitude turnaround. The Army sent another unit.
Watching CNN footage of the war in our break room in January, we looked forward to the end of our activation. "Not so fast," Uncle Sam said. Once the troops started returning home, we had to sort their mail returning from Saudi, so our mission didn't end until May 1991. Seeing the pallets covered in fine sand gave us even more gratitude than we already had.
My grandfather (WW1), father (WW2), four brothers, eight uncles, many nephews and cousins have served, so I’m no stranger to the military. I'm proud of my service, as was my dad. I wish he was still with us to see his baby girl active in the Legion. He loved spending time at our post back in Michigan, and whenever my parents drove anywhere, they visited the local posts along the way. As I've discovered, the Legion is a comfortable place where you’re surrounded by other veterans. I understand now why my dad loved it so much.