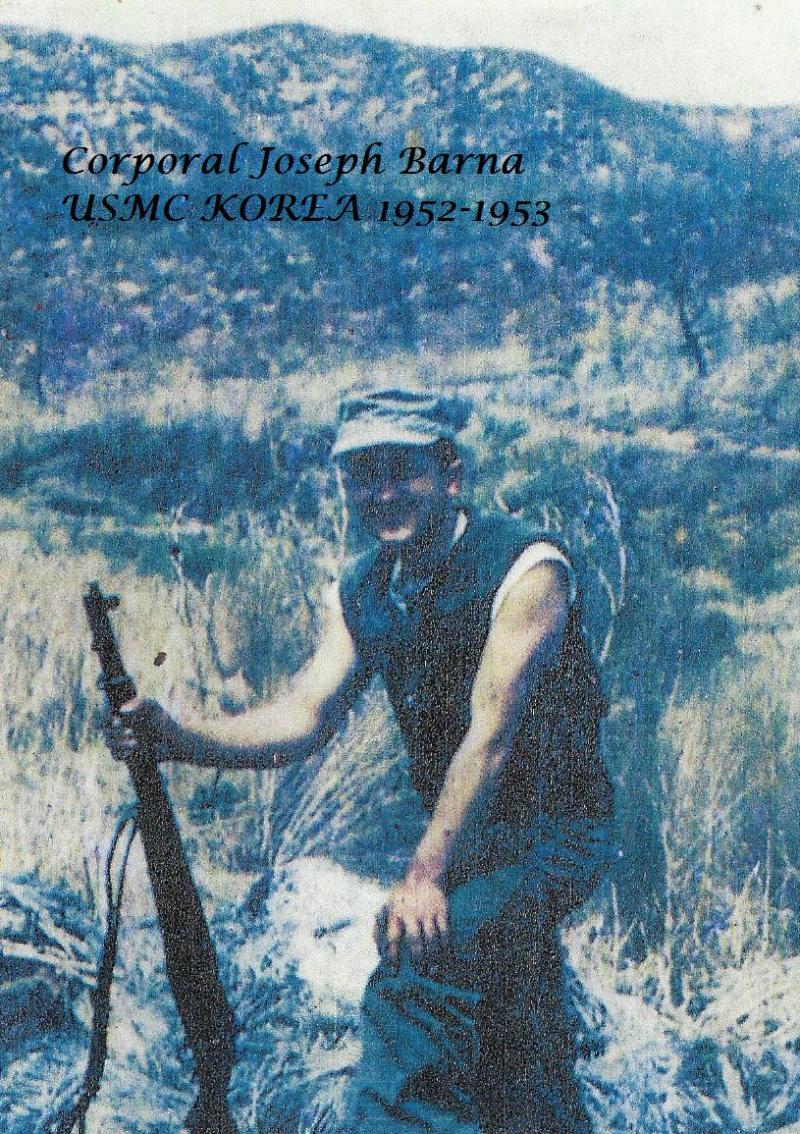 I am a Marine Corps Combat Veteran of the Korean War. I served in Korea from June 1952 thru July 1953. I served with Weapons Company, Anti-Tank Assault Platoon, 1st Bn, 1st Regt. For over 5 months I carried a 70 lb. flame thrower. This is one of the most devastating weapons of war ever conceived. I stood 5 foot 8 inches tall and weighed 158 lbs. I could not have accomplished this if I was not in the perfect physical shape that the Marine Corps molded me into. After the flame-thrower, I moved to a 3.5 rocket launcher, called a bazooka for several months. Finally, I ended my tour in Korea operating a 30 caliber and 50 caliber machine guns. My 1st Marine Division sustained almost 5,800 Killed-In-Action and thousands more wounded in 3 years.

I landed in Korea in 1952 along with 6000 other Marines. I never realized what my next year would be like. I was one scared kid. It was like jumping into a hole where you couldn’t see the bottom. My only thought was “Would I ever see my family again?” I could not possibly expect what I would do and see in the year to come.

Korea was a country of mountains and rice paddies. The mountains were thousands of feet high. This would be my home until I returned to the States or was carried home in a body bag. I knew then, I would never let my family be ashamed of me. For over one year, I would be facing death, see so many of my buddies die or lose parts of their bodies and minds. And yes, I would kill.

When the Chinese entered the Korean War, we were out-numbered 8 to 1. My Marine training helped me to understand what you needed to do to survive. You must get used to an attack just about every day or night. Fighting against those odds, you never knew if you would ever see tomorrow. You found out what it meant to pray, and how to cry from the inside.

I would like to describe a typical night in Korea, a night like hundreds: It was dark and cold. With my brother Marines, we settled down in a fox hole or bunker, machine gun in our arms. Trying to keep warm, you would be jolted by the sound of hundreds of bugles. They were not playing any song you could know, but it was a sound I will never forget. After minutes that would seem like hours, the bugles would stop. Then the sky was lit up by flares. As these flares would fall to earth, you would see and hear hundreds of screaming North Koreans and Chinese troops coming at us. We would call for artillery and mortars. We would hear what sounded like freight trains going over our heads. When this finally let up, you found yourself facing hundreds of enemy soldiers whose only thought was to kill Americans. I remember smelling the garlic on their breaths as they were upon us. Minutes of battle turned to hours, and when it was over, you could see the dead and hear the cries of the wounded. Such combat was repeated almost every day and night. After one of these battles, a sergeant and I came upon one of our wounded. The face of this dying 21 year old Marine is forever cemented in my mind. As breath and blood were leaving his body, he spoke his final words. I will never forget them: “Why is God taking me when I’m so young and have so much to live for? What did I do wrong?” I held his hand as he died and whispered “Nothing.” I thought to myself “Why him and not me.” The enemy, it seemed, had so many more than us to sacrifice. There was always tomorrow to come at us again. Of the 6000 Marines that I landed with, only 750 returned home. But we were never beaten. And yet, some historians never called this a war.

To be able to cry is one of the most beautiful things in life I believe. When I was born, I must have been issued a certain amount of tears to use up in my lifetime. In Korea, I thought I had used all of them up. I cried every time I saw a brother die or be wounded. The tears might have been hard to see, but they were there. I also cried whenever I saw the South Korean civilians, children, mothers, fathers, and grandparents. During a battle these angels, would go among the dead and wounded and carry them down the mountain, away from the ongoing battle. I would see these same people going thru garbage piles looking for something to eat. How lucky are we to have never been forced to live this way. I came home and for a long time found that I could not cry anymore. Did I use up all my tears in the war? Thru the years, I went to my father’s, brother’s, mother’s and daughter’s funerals and not one tear would roll off my cheek. This would tear me apart. I now belong to my town’s VFW and American Legion Honor Guard. We attend all veteran’s funerals when asked to do so. Finally, after many long months of attending military services, I began to believe that I could cry once more. Being part of the VFW and American Legion Honor Guards, we help lay to rest all our comrades. I began to think back and finally, the tears began to flow once more.

My Local American Legion Post 473 and Veterans of Foreign Wars Post 5010, both of Freeland, Pa. provide many services to the local community. In addition to sponsoring local scholarships and youth sports, we also provide charitable donations and support to local requests for help. I also belong to the Order of the Purple Heart and Disabled American Veterans.