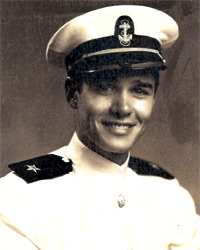 I have many experiences very unusual in nature, but here is one I shall never forget:

Because I had good grades and the war was coming, the Navy gave me an ensign AVS.

My first assignment was as a parachute officer at Corpus Christi, Texas. Because I was so new, the 50 or so men I was in charge of just gave me a very rough time.

So one morning, I had the big troublemaker take two steps forward and I said, “We are going up to a four- or five-thousand foot jump out, and the man who opens his chute last is the boss.”

Up we went. I had never made a jump, but he had to qualify as a parachute rigger.

I was not going to open my chute till I saw his open. When he did, I opened mine, and just as it was billowing out and swinging under, I hit ground. The wind was knocked out of me. But from that day on, I was the boss.

I started parachute rigger school, so upon graduation, I had made about six or seven static line jumps with the class.