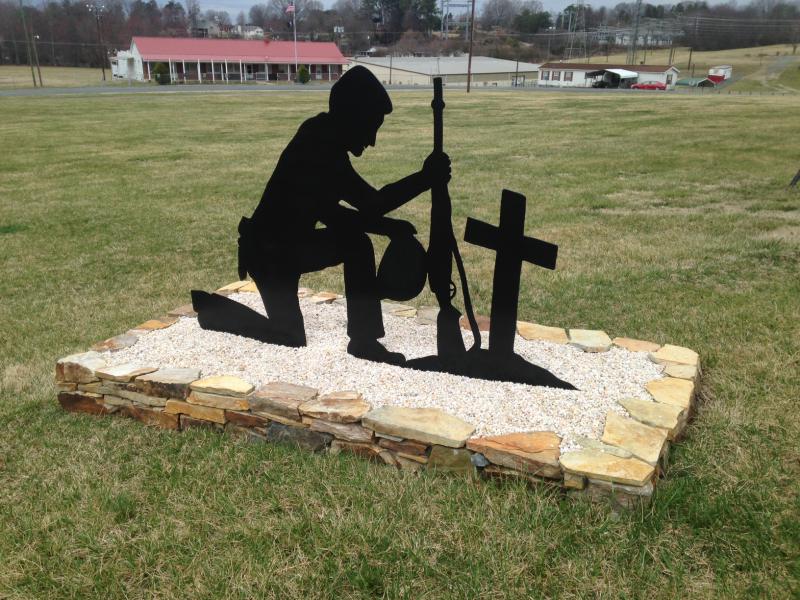 In King, N.C., a legal battle threatened to omit a veterans monument from the town. Now, there are several.

Legionnaire Steven Hewett sued the city regarding the public monument, located in a city park, a steel silhouette of a soldier kneeling at a battlefield grave in the shape of a cross. He argued the statue violated his first amendment rights, promoting Christianity. (Read more about the situation here: http://burnpit.legion.org/2015/02/king-city-kneeling-soldier-memorial-do...)

To avoid an expensive legal battle, the town replaced the silhouette with one featuring a battlefield cross, the gravemarker of boots and rifle. Post 290 asked that the city donate the original monument to them.

"This monument of a kneeling soldier--we feel--is completely nonreligious. It is recognized worldwide that a cross is for a fallen soldier. If you attend just about any military funeral in the world, you will find that the cross is the gravemarker. That's all it is," Holland said. "We felt that this was honoring our soldiers."

The original monument, plus a matching replica, now sit in front of the post entrance--flanking the horseshoe-shaped driveway. The post paid about $1,900 for the project, most of which went toward building a base and lighting.

Post 290 is in the planning phases of adding a memorial between the two silhouettes, adding to the attraction.

Holland said the silhouette is more visible now than it was before.

"It's much more prominent. You had to drive down into the park. You could not see the silhouettes on the road," Holland said. "Now, it's sitting approximately 20 feet from the road. We have two of them, and they are lit at night.

"Everybody driving into or out of King can see it."

Holland said there has been no controversy surrounding the move.

"Just about every third car that drove by would toot their horn and wave at us. So it's been well-received in the community," he said.

Holland said the post will still hold its annual events, such as Veterans Day and Memorial Day ceremonies, at the city's park in front of the new monument.