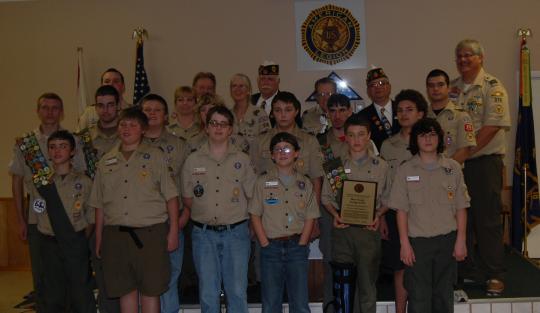 On February 8, 2010 American Legion Post 155 helped commemorate the celebration of the 100th Anniversary of Boy Scouts of America. In honor of this milestone, Boy Scout Troop 370 was hosted for a celebration at Post 155 and awards were given out to include pinning the most covenant award for a Boy Scout by raising to the ranks to Eagle Scout.
Fellow Legionnaires from American Legion Post 155 in Crystal River, Fl., who give so much of their time to the Scouting program include John Coble Troop 370 Scoutmaster, Andy Freund Troop 370 assistant Scoutmaster, John Hallowell Troop 370 liaison and Bob Scott, Boy Scout Committee Chairman. The BSOA is the largest youth organization in the United States, it has 2.8 million youth members and 1.1 million adult leaders in the programs of cub scouting, boy scouting and venturing has teamed up with the world's largest veterans organization, The American Legion with over 2.5 million Veterans for the past 90 years.
The mission of the Boy Scouts of America is "to prepare young people to make ethical and moral choices over their lifetimes by instilling in them the values of the Scout oath and law." Every day across our nation, Scouts and their leaders pledge to live up to the promise in the Scout oath—"On my honor I will do my best, To do my duty to God and my country and to obey the Scout law; To help other people at all times; To keep myself physically strong, mentally awake, and morally straight"—and the Scout Law, according to which a Scout is "trustworthy, loyal, helpful, friendly, courteous, kind, obedient, cheerful, thrifty, brave, clean, and reverent."
To commemorate the occasion, the Scout alumni, Eagle Scouts, and past Scout leaders were invited. More than 80 members attended the event which included the entire history of The Boy Scouts of America's 100 years of service and The American Legion's 91 years of existence and adopted by The American Legion at its first national convention as its first ever program.