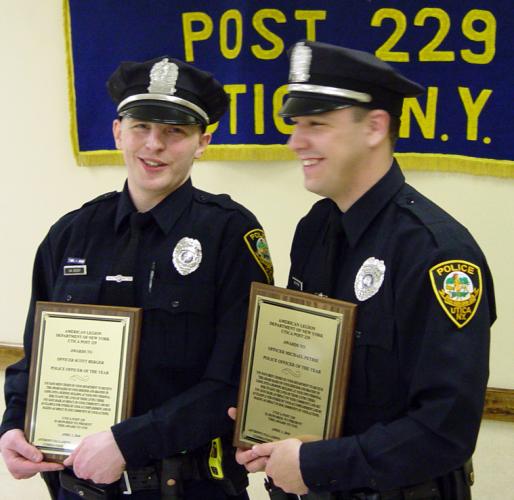 UTICA, NY – Two Utica police officers dashed into a burning James Street building last September and evacuated as many occupants as they could. For that courageous action, The American Legion’s Utica Post 229 is honoring them as Police Officers of the Year, Post Commander Anthony Palladino announced .

The honorees, who received the awards at the post’s monthly meeting on Thursday, April 1, are:

-- Scott Berger, a six-year veteran of the police department.
-- Michael Petrie, a rookie who has been with the department for about a year.

The officers were nominated by their immediate supervisor, Sgt. John Martello, who said the pair found heavy smoke and flames coming out of the apartment house when they arrived at about 1:37 a.m. They saw a few people huddled by the front door, and got them away from the building. Then, “without regard to their safety,” Martello said in the nomination, the officers ran into the structure and pounded on doors on the first, second and third floors, yelling to residents to get out. After that, they went around to the rear of the structure, where they found a few more people and got them away from the building. Then they tried to enter the back door, but heavy smoke and flames kept them out; and a short time later, an explosion blew out the rear door and sent the officers scrambling for safety.

Four people died in that blaze. Eighteen people lived in the building.

“If it weren’t for these two officers running into the building, full of smoke and flames, and getting people out, the death toll would have been much greater,” Police Chief Mark Williams said at the awards presentation.

Paul Wojcik, the post’s law-and-order chair, handed the awards to Williams and Deputy Chief Mike Bailey, so they could personally present them to Berger and Petrie.

The awards ceremony followed a dinner attended by Legionnaires, Auxiliary members, the families of both honorees, and a number of police officers.