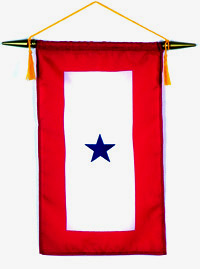 The Blue Star Service Banner was designed and patented in 1917 by World War I Army Capt. Robert L. Queisser of the 5th Ohio Infantry. Queisser’s two sons served on the front line. His banner quickly became the unofficial symbol for parents with a child in active military service.

On Sept. 24, 1917, an Ohio congressman read the following into the Congressional Record: “The mayor of Cleveland, the Chamber of Commerce and the governor of Ohio have adopted this service flag. The world should know of those who give so much for liberty. The dearest thing in all the world to a father and mother: their children.” Blue Star Mothers and Gold Star Mothers organizations were established during World War I and remain active today.

During World War II, the Department of War issued specifications on manufacture of the flag, as well as guidelines indicating when the service flag could be flown and by whom. Restrictions were also passed on who can wear the service lapel. The Department of Defense authorized the service flag and service lapel on Dec. 1, 1967, with DoD Directive 1348.1, which implemented an act of Congress (U.S. Code 179-182). The Blue Star Service Banner is an 8.5-by-14-inch white field with one or more blue stars sewn onto a red banner. The size varies but should be in proportion to the U.S. flag. Today, families display these banners when they have a loved one serving in the U.S. Armed Forces. The blue star represents one family member serving, and a banner can have up to five stars. If the individual is killed or dies, a smaller golden star is placed over it. Gold stars are placed above the blue stars or to the top right of the flag, in the event a flag represents multiple servicemembers.

Blue Star Service Banners were widely used during both world wars, but were not embraced during the Korean or Vietnam wars with the same enthusiasm. The American Legion rekindled that spirit of pride in our military men and women following the Sept. 11, 2001, terrorist attacks by providing banners to military families across the nation.

For more information, contact the National Security Office at (202) 263-2987 or aosei@legion.org.