On Feb. 9, 2009, The American Legion announced its support for the Army's Community Covenant program, which aims to inspire leadership in U.S. states, cities and towns to conduct signing ceremonies that visibly demonstrate support for military families. Since the program's inception, more than 450 covenants have been signed in 48 states, three territories and Washington, D.C. 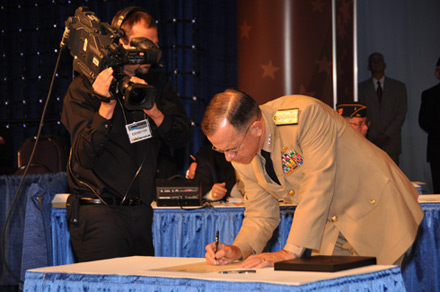 The Army created the Community Covenant program in April 2008 to give communities across the country a unique way to honor servicemembers and their families. Last year, the pilot program visited major cities and small towns alike and was hosted by all levels of civic leaders, including mayors, governors and members of Congress.

The program encourages governors, county commissioners, mayors and other community leaders to sign official declarations acknowledging the sacrifices of local servicemembers. Though Community Covenant started as an Army-specific program, it has been expanded to honor the sacrifices of all military families.

The Army provides community leaders with a covenant template to make their symbolic gesture. However, many choose to draft a more comprehensive version with their local military families. Some communities have adopted local National Guard units preparing to deploy, while others have rally around wounded warriors returning from combat.

Once each covenant is signed, it is usually displayed in a prominent location, such as city hall, the state capitol or nearby military installations.