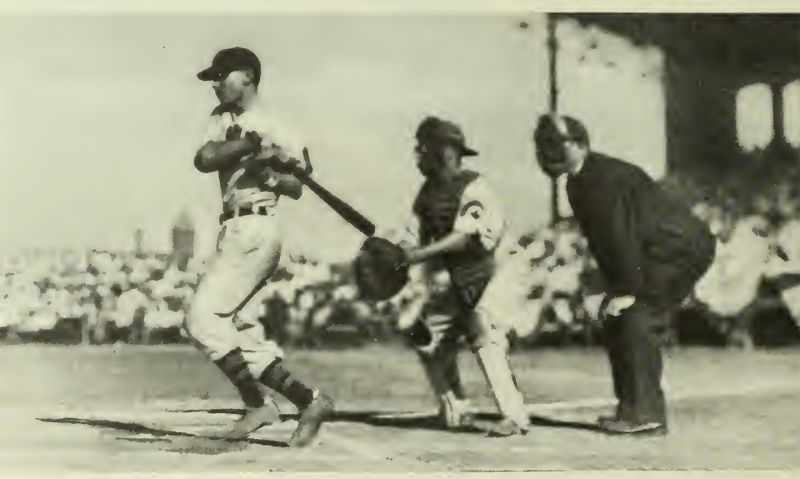 Captain Jimmy Fraiche, brilliant shortstop of the New Orleans team which won the Legion's Junior World Series at Manchester, New Hampshire, hitting out a home run in the second game of the series. Jimmy's hit in the fourth game brought home the bacon for his team. Captain Pete Siciliano of the Springfield, Massachusetts, team behind the plate, and Umpire Charley Donnelly of the National League.

EDITOR’S NOTE: This is the fifth and final in a series of stories looking at the American Legion Baseball playoffs before the switch to the eight-regional format in 1960. Part 1 took a look at the first American Legion World Series in 1926. Part 2 showcased the playoff structure before 1960. Part 3 highlighted some of the individual standout performers before 1960. And Part 4 looked at the most successful states before 1960.

While American Legion Baseball national tournaments have long been hosted by participants in the events, that fact was particularly true in the early days of the event.

From 1926 to 1959, 65 teams played in regional or sectional tournaments that they hosted.

Did "homefield" advantage pay off for those teams?

A frequent host, New Orleans, hosted regionals in each of the years it won the ALWS — 1932 and 1946. It also hosted the 1937 regional and sectional that helped New Orleans to an eventual ALWS runner-up finish.

Other eventual ALWS champions that hosted national tournaments in this era were Spartanburg, S.C., in 1936; Yakima, Wash., in 1953; and Cincinnati, Ohio, in 1957.

Spartanburg's "long" trip in 1936 was to win a sectional played in Charlotte, N.C., which is 78 miles away.

After winning the 1953 regional it hosted, Yakima would travel across the country, first winning a sectional title in Hastings, Neb., before winning the ALWS in Miami, which is 3,179 miles away for Yakima.

And Cincinnati's 1957 title run continued with a sectional in Oshkosh, Wis., and ALWS in Billings, Mont.

States or territories who never hosted an American Legion Baseball national tournament in this era were Alaska, Hawaii and Panama.