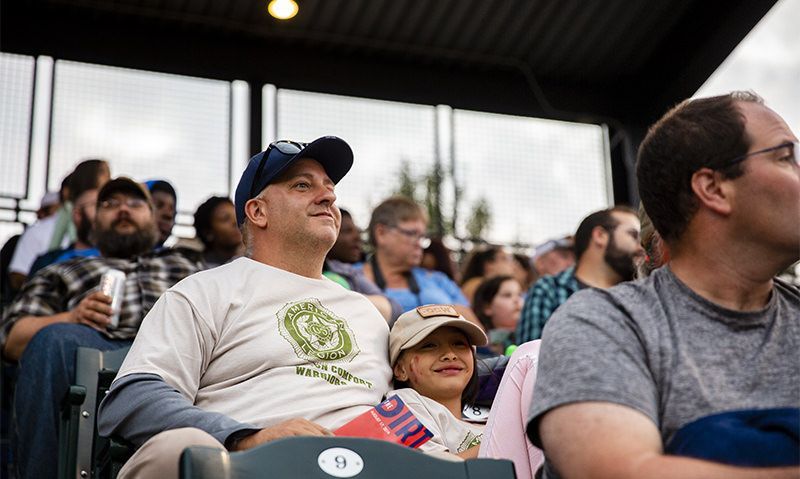 The American Legion’s Operation Comfort Warriors (OCW) program helped thousands of wounded veterans and their families this year through donations of rehabilitation equipment and comfort items, as well as a number of events aimed at providing respite and fun.

The following are a few examples of how OCW grants were able to assist others.

In June, more than 100 wounded veterans spend three days fishing Lake Erie as part of the eighth annual Walleyes for Wounded Heroes event. The American Legion has provided grants to fund the event since 2014; this year’s $16,000 grant covered the cost of lodging as well as daily breakfast and lunch for the veterans.

“For us to come up with that money every year that the Legion donates would be so many extra hours that we just don’t have,” said Walleyes for Wounded Heroes President Joe Stelzer, a member of American Legion Post 323 in St. Marys, Ohio.

Tom Crites, a member of American Legion Post 452 in Stanton, Mich., said the event gives the veterans a chance to help other veterans.

“We went through some of the same things they went through. If we can help them get help, get their PTSD more under control … it can help the younger veterans bond with us. We’re here as older people and can take a younger guy under our wing and become friends with him. Each year we see them that bond grows stronger. It’s really satisfying for us to help other veterans,” Crites said.

A night at the ballpark

Through a relationship with Hawthorne Gardening Company, the OCW program was able to invite 500 veterans and their families to a Tacoma Rainiers minor-league baseball game in August.

Some 25 employees from Hawthorne drove two hours to volunteer their time to welcome veterans and their families to the ballpark and hand out complimentary T-shirts and hats. They were joined by members of The American Legion Department of Washington, including Department Commander Bob Clark, who threw out the first pitch.

“This is what it’s all about, getting together, having camaraderie, doing things in a community,” Clark said.

“I think it’s great to get all the veterans out here in support of each other, and enjoy a night of sport,” said Carmita “Angel” Nash, a veteran of the Army and Washington National Guard.

The same weekend as the Tacoma event, OCW donations covered the cost of admission and lunch at Six Flags Fiesta in San Antonio for hundreds of patients and their families from Brooke Army Medical Center. OCW has worked with the Department of Texas since 2012 to make this event happen.

During The American Legion National Convention Parade in Indianapolis on Aug. 25, the Legion’s centennial float included three special guests courtesy of the OCW program. U.S. Army Staff Sgt. Dustin Maxfield, Sgt. Chris Leverkuhn and Sgt. Chris Henderson – all medically retired after suffering injuries while either in training operations or combat – were guests of The American Legion over the weekend as part of the Legion’s Operation Comfort Warriors program.

The trio, who served together in the 209th Quartermaster Company out of Lafayette, Ind., were able to do some sightseeing, hit area restaurants and even attend the Aug. 24 Indianapolis Colts preseason game.

Every dollar donated to OCW goes toward the comfort items and services that help servicemembers in their recovery. For donations to OCW, visit www.legion.org/donate.