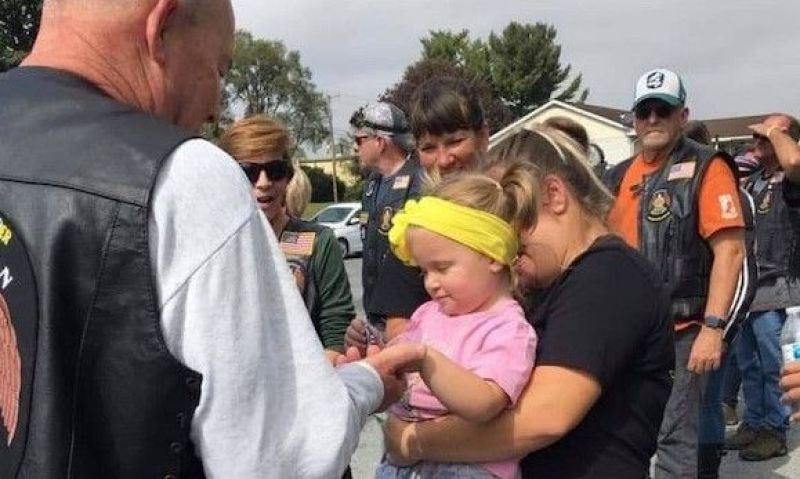 Pennsylvania Legion Riders greet Ariella Coyne during a fundraising effort to help with costs of her treatment. Photo courtesy of Kevin L. Murray

American Legion Riders of Pennsylvania’s Region 7 rallied in 2019 and 2022 to help the family of a young girl fighting a rare form of eye cancer, and a children’s book published this month seeks to spread her message of courage for others getting treatment.

“The Tale of Princess Warrior Ariella and the Dreaded Cancerous Dragon” was written by Sons of The American Legion member and Legion Rider Kevin Murray of Annville, Pa., illustrated by Nina Mkhoiani and edited by Ariane Laurent-Smith of Rogue Graphic Design. Yvonne Koons, president of Rogue Graphic Design in Mechanicsburg, Pa., told Murray when he showed her his notes that “If you don’t make this a kids’ story, there’s something wrong with you.” Rogue would later donate illustration and design for the book, which Murray says would not have happened without her support.

More information about the book, which sells for $15 each plus shipping, is available at www.warriorariella.com.

Funds raised through a Sept. 28, 2019, Legion Riders “Core 4 Ride for Ariella” generated $3,600 for the family of young Ariella, then undergoing chemotherapy and stem-cell procedures to vanquish retinoblastoma and to get her first prosthetic eye. That ride involved Legion Riders chapters from Annville, Hershey, Campbelltown  and Hummelstown.

As part of the ride, participants received white poker chips from little Ariella.

In late 2021, cancer returned, and the treatment program grew even more difficult and expensive for her parents. At a planning meeting for some 50 chapters in Region 7 last winter, Murray suggested the Riders raise funds to continue helping the family. Many at the planning meeting still carried the chip from the first ride.

They launched a “Mile for Hope” fundraiser – with a special new chip of its own – that produced another $5,850 last May for the family to help them cover their expenses and make up for lost work hours.

The newly published book tells how Princess Ariella received help from the “Knights of Leather and Steel” – motorcycle-riding soldiers in black vests – to beat the dragon twice. In the final pages, Ariella, who was 2 ½ years old at the time Murray learned of her plight, is shown in her own black vest (she was given one of her own last spring by the Riders) after her most recent victory.

In addition to online sales to support the facilities, Murray says the books will be placed at the treatment centers themselves, to be read to children receiving care, giving them hope and understanding that they are not alone.

“Reading a book like that gets (kids) to understand there are others out there who are like them,” says Ariella’s mother, Terina Coyne, who adds that support from the Legion Riders and the community have been “a godsend. It just gives us so much more comfort. With so much going on, it’s nice to know people are there when you need them.”

The story of Ariella and the Legion Riders of Pennsylvania who became her knights is featured in the December issue of The American Legion Magazine.