American Legion Riders chapters are well known for their charitable work, which has raised hundreds of thousands of dollars for local children's hospitals, schools, veterans homes, severely wounded servicemembers and scholarships. Since 2006, Riders nationwide have participated in The American Legion Legacy Run to annually raise money for the Legacy Scholarship Fund, established to provide scholarships to children of U.S. military personnel killed since Sept. 11, 2001.

For the latest in Riders apparel and gear, including patches, go to Legion Rider Merchandise - Emblem Sales. 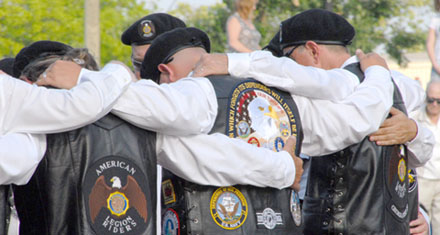 In Garden City, Mich., in 1993, Chuck "Tramp" Dare and Bill "Polka" Kaledas, commander of American Legion Post 396, shared an idea to start a motorcycle enthusiasts association within the organization. The two longtime riders wanted an environment where Legion family members could come together to share a common love for motorcycles.

Dare and Kaledas wrote a letter to Michigan Department Adjutant Hubert Hess, sharing their idea. Hess replied that he liked the concept and wanted to pursue it. Later, he gave Kaledas and Dare instructions for managing the program at the post level. He also explained how they could be approved to use the American Legion emblem, and how to gain Membership's support and recognition. At a regular meeting, Post 396 members passed a resolution for a new program to be known as the "American Legion Riders."

Joined by 19 other founding members from their post, Dare and Kaledas were flooded with requests for information about their organization. They agreed to establish a central source for the Riders to ensure that chapters formed not as motorcycle clubs or gangs, but as Legionnaires and Auxiliary and SAL members joining to ride as Legion family.

Currently, over 110,000 American Legion Riders meet in over 2,000 chapters in every domestic department and in at least three foreign countries. Riders in Iowa have formed an honor guard called The Five Star Freedom Riders, and Riders in Mulvane, Kan., founded the Patriot Guard to protect the sanctity of military funerals from protesters. Riders in all states have escorted military units returning home from combat tours overseas, conducted massive cross-country fundraising events for wounded warriors from all services, and have raised millions of dollars for countless local, state and national charities. Many Riders, supported by their departments, conduct annual statewide Legacy Runs in direct support of American Legion scholarship progras of Operation Comfort Warriors (OCW), supporting our wounded servicemembers across the nation.

True to the Legion's grassroots tradition, each chapter manages its programs at the post level, where the best ideas are born. The Riders are part of many projects and events, including:

The following guidelines are recommended for The ALR program of The American Legion: