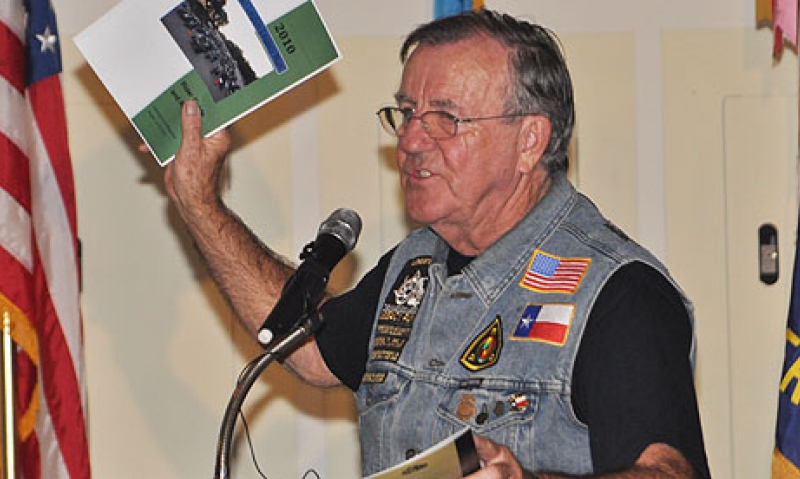 Dick Woods, chief road captain for the Legacy Run, goes over the details the Saturday before the run.

Standing less than six feet tall and wearing glasses, Dick Woods doesn't strike an imposing figure. In fact, after talking to him and addressing him as "Mr. Woods," he told me, "Call me Uncle Dick."

But when he took to the podium at the Legion Riders pre-Legacy Run briefing Saturday night, Woods - the ride's chief road captain - demanded respect. And commanded it.

"This isn't a democracy. It's a dictatorship, and I'm Dick and Tator," Woods told the 300 or so participants in the fifth Legacy Run. "I can't ask you guys to straighten up after the first day. We have to get it right early on."

Woods, a participant of every Legacy Run and member of Converse Post 593 in Texas, laughed and joked while addressing the group. He thanked them for taking the time to participate in the Legacy Run and told them, "I would ride with you guys anywhere you want to go." But he's all serious when it comes to safety and procedure once the ride begins.

"Someone has got to be in charge," Woods told me. "I think you have to instill confidence in the people on the ride, as well as the road captains and assistant road captains. And I want to give the other road captains the confidence to run their groups the way I run the whole group."

The pre-ride meeting was hosted by Wayne Post 64 in Indianapolis and was followed by a post-sponsored dinner. During the meeting - where more than $175,000 in donations to the Legacy Fund were delivered, bringing the run's total to more than $263,000 so far - National Commander Clarence Hill addressed the group, as did representatives from the post and Department of Indiana, and National Headquarters Executive Director Marty Justis, a ride participant.

"For the next few days, you are the face of The American Legion," Justis said. "You have to have your best face on."

This is my first Legacy Run. I've been told everything from "it's a really long week" to "you're going to have a good time." I imagine it will straddle somewhere in between the two. But when you think about the circumstances that led to the creation of the Legacy Fund - along with the sacrifices made by those who are directly affected by the fund - then stringing together a couple long days really seems a pretty insignificant sacrifice in comparison.

We just finished up breakfast - again, courtesy of Post 64 - and are getting ready to head out. There's a vibe in the room. A nervous anticipation, combined with the buzz of a reunion of old friends.

After a lunch at Post 120 in Effingham, Ill., we head to an evening event at Post 223 in Higginsville, Mo.