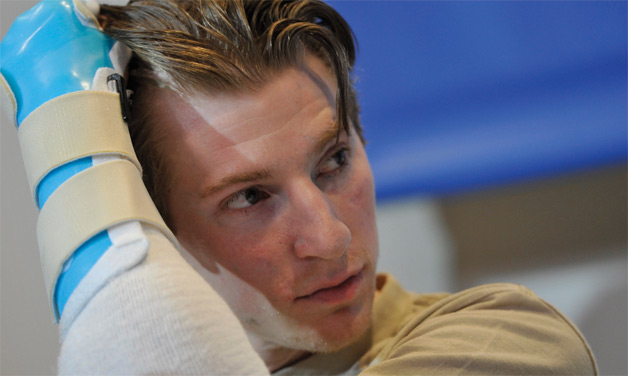 Brendan Marrocco has new arms. Nearly four years after an armor‑piercing roadside bomb claimed all four of his limbs, Brendan became the first person in the United States to receive such an extensive bilateral arm transplant. Now he sees the day when he’s driving himself to the store or racing his Dodge Charger.

“It makes me feel more human,” Brendan says. “It’s given me more confidence about myself. It’s something I was waiting for a long time.”

His family is astounded and grateful. “It just blows my mind,” says his mother, Michelle, who is a nurse. “I look at his arms, and I think, ‘How can it be? You have two sets of DNA here but it heals like any cut.’”

The arm transplants, which took place at The Johns Hopkins Hospital just before Christmas last year, also give hope to others who have lost hands and arms. “This is groundbreaking work,” says Col. John Scherer of the Armed Forces Institute of Regenerative Medicine (AFIRM), which is helping fund limb transplants and other clinical trials for wounded warriors. “This will allow us to understand how the body will adapt to new arms.”

Brendan was injured on Easter Sunday 2009 when a roadside bomb ripped open the armored truck he was driving during a night mission 130 miles north of Baghdad. The bomb cost him his arms and legs, burned his body and damaged his left eye. When Alex and Michelle first walked into Landstuhl Regional Medical Center in Germany, they did not recognize their son. “We wouldn’t have known it was him if someone hadn’t told us,” Alex says.

Brendan was the first surviving quadruple amputee from the wars in Iraq and Afghanistan. Soon after he arrived at Walter Reed Army Medical Center, he told his medical team that he wanted to be standing on the tarmac in Hawaii to greet his unit when they returned in about six months.

Brendan’s recovery continued to defy expectations. He mastered his first set of prosthetic legs in five weeks with the help of Walter Reed’s rehabilitation team and his brother Mike, who quit his job on Wall Street to become his primary caregiver. He caught the attention of Gen. James Amos, then assistant Marine Corps commandant, who asked Brendan if he was interested in arm transplants.

A few weeks later, Brendan met with pioneering surgeon Dr. W.P. Andrew Lee, then at the University of Pittsburgh, who developed a limb transplant regimen using a fraction of the immunosuppression drugs required for organ transplants, which have serious side effects.

Brendan had no second thoughts. “Pretty much from the get-go, I thought it was great,” he says.

Michelle, though, was angry, feeling that someone was giving her son false hope. That turned to worry when she learned that arm and hand transplants were really possible. “My greatest fear was that he would die on the operating table,” she says. “This is major elective surgery. Anything can happen. But it wasn’t my decision to make.”

Michelle also tried to persuade Brendan to have just a right-arm transplant to reduce his reliance on people post-surgery, given that he was doing well with the myoelectric prosthesis on his left side. “He doesn’t want to be dependent,” she says.

But prosthetic arms “were never the endpoint for me,” Brendan says. And Michelle says that she admires his courage, considering that he faced an additional three years of rehabilitation and a lifetime medication regimen as a result of the transplants.

Getting the arms alone proved a long and frustrating journey. Finding the right donor is difficult. Donor limbs have to be the same size, build and skin tone as well as matching the recipient’s blood and tissue types. After waiting for a donor for a year, Brendan contracted a bone infection and had to drop off the transplant list for 10 months.

“He was very discouraged,” Michelle says.

Brendan left Walter Reed in July 2011 and moved into a specialized home on Staten Island, N.Y., near where he grew up. The house was built with funds raised by the Stephen Siller Tunnel to Towers Foundation, Building Homes for Heroes and the Brendan Marrocco Road to Recovery Trust.

Lee, meanwhile, moved to Johns Hopkins University School of Medicine to become chairman of the plastic and reconstructive surgery department, and continued to prepare for the operation. Brendan would require the most complicated transplant surgery Lee’s team had ever performed. “It is really the first time in the country two arms were transplanted – the left arm to the elbow joint and the right arm above the elbow,” he says.

The left-arm transplant was especially challenging because Brendan didn’t have enough remaining muscle to operate a wrist or hand. Yet Lee wanted to preserve Brendan’s left elbow so that in the unlikely event that the transplant wasn’t successful, he would retain use of the joint.

Surgeons, nurses, anesthesiologists and other members of the team began meeting two years before the actual operation. They practiced the surgery on cadavers four times, right down to detaching and attaching the bones, nerves, tendons and skin. Each of the 16 surgeons had a specific task. One was responsible for preparing the bone on the right recipient arm, another for the muscle on the left donor arm.

“Going in,” Lee says, “everyone knew what he or she was going to do.”

Brendan was at his father’s house when he received a call from Lee on Dec. 16 telling him that they might finally have a donor. “I got a text from Brendan saying something like, ‘I think you’ll want to get home early,’” Alex says. “That meant one of two things. Either the roof is leaking again, or he got the arms phone call.”
Michelle and Mike were having lunch at a Staten Island restaurant when they got the word from Brendan. “I started to shake,” says Michelle, who had kept her suitcase packed the entire first year Brendan was on the transplant list.

The family traveled to Baltimore together on Dec. 17. Brendan’s transplant surgery began at 1:30 the next morning in an operating room crowded with medical staff, microscopes, a portable X-ray machine and other equipment. “Operating rooms are not designed for bilateral arm transplants,” Lee says.

Thanks in large part to the teamwork among doctors and nurses, however, it worked. Brendan had new arms after 13 hours of surgery – his 22nd operation since he was wounded.

He woke from the surgery excited, but confused from the anesthesia. “I was looking around for my arms,” he says. “It was weird because I couldn’t find them at first.”
Two weeks after the surgery, Brendan received an infusion of the donor’s bone marrow, part of the protocol Lee developed to help trick the immune system into accepting the new limbs. So far, Brendan hasn’t experienced any rejection.

“That’s the biggest hurdle of all transplants,” says Scherer, who is director of the Army’s Clinical and Rehabilitative Medicine Research Program in addition to his work with AFIRM. “We’ll revolutionize the transplant world if we can dramatically reduce or eliminate immunosuppression.”

Brendan’s success is good news for other wounded warriors contemplating limb transplants. More servicemembers have lost multiple limbs as insurgents develop more powerful IEDs, Lee says. About 300 have had major upper-extremity amputations as a result of combat in Iraq and Afghanistan. A number of them are going through the screening process for transplants.

Brendan spends four to six hours a day in hand therapy, six days a week. “I should be getting decent function in the coming year,” he says. “It will be a couple of years before I get feeling.” The nerves regrow a maximum of an inch a month.

He credits his family as the single most important element in his recovery and looks forward to giving them a break. “Being independent is definitely my main goal – being able to do what I want and not having to worry about someone being around the whole time,” he says.

In a few months, Brendan will move to Walter Reed National Military Medical Center, where he will get back on his prosthetic legs as well as work to strengthen his new arms and hands. He hasn’t used his legs in about 18 months. “Not having arms, you aren’t able to keep your balance. Once you lose your balance, you can’t grab anything.”
In the long term, Brendan will continue working on the 2006 Dodge Charger that he plans to race one day. People who know him aren’t surprised.

“I thoroughly expect him to scare the hell out of me,” Michelle says, although she isn’t sure she’s up for watching Brendan race. “I’ll support him in any way I can, but that might be pushing it.”