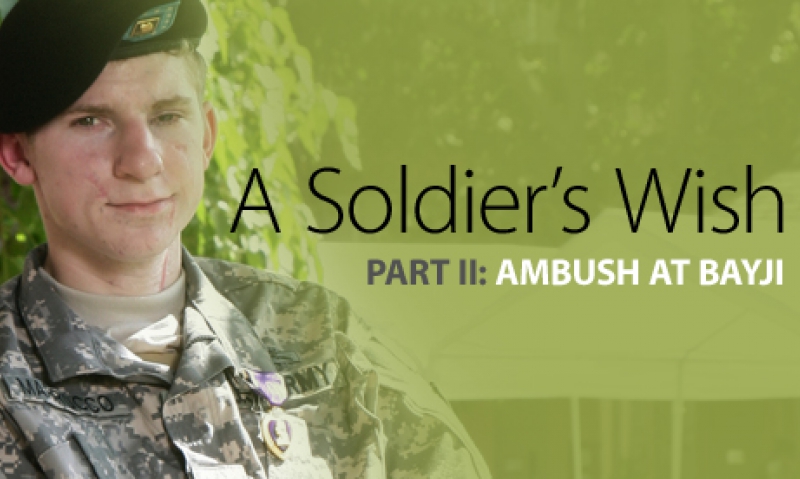 Brendan Marrocco's Bronze Star nomination includes a handwritten note from the battalion's executive officer. It describes how the 23-year-old U.S. Army soldier from New York "... embodies the attributes of sacrifice, selfless service and discipline. Always ready to perform any mission in combat."

These are some of the attributes that also prompted Lt. Rich Kilcoyne, leader of the 2nd Platoon, to honor Marrocco - then a private first class - as a Mine Resistant Ambush Protected (MRAP) vehicle driver last April.

The 2nd Battalion of the 27th Infantry Regiment was stationed at Forward Operating Base Summerall, 130 miles north of Baghdad, near Bayji - perilous territory in the combat theater. The locals are almost all Sunnis. Many are former members of Saddam Hussein's Baath Party. The 82nd Airborne and the 101st Airborne, which preceded Marrocco's battalion in the region, suffered many losses in this particularly hostile part of Iraq.

Soldiers at FOB Summerall worked closely with police in Siniyah and performed joint patrols with Iraqi Police. Marrocco's platoon served as the quick-response force for the battalion, rushing to the scene whenever a roadside bomb went off or trouble erupted. "We were a very close-knit platoon," Kilcyone says. "We did a great job of keeping Siniyah under control."

Late on the night before Easter, Brendan Marrocco called his father in the United States. At the end of the conversation he said, "Look, I've got to get going. We're going out tonight." At about 11:30 p.m., 15 members of the 2nd Platoon left FOB Summerall to escort other U.S. soldiers to the Siniyah Joint Security Station. Marrocco was at the wheel of one of the MRAPS in the four-vehicle convoy.

The platoon delivered the soldiers without trouble. A half-hour after midnight, the group headed back to the FOB, following the same dirt road they traveled to reach Siniyah, a lonely desert bypass that tracked a high-voltage power line. U.S. troops often travel along such routes to keep a low profile and avoid traffic.

The convoy was just 25 minutes from the base when it was attacked.

The first three trucks passed the sophisticated roadside bomb, known as an "anti-armor IED", or an "explosively formed projectile" (EFP) without incident. It exploded into Marrocco's vehicle, the last in the convoy.

The armor-piercing projectile punched through the middle of the driver's side door and exited just above the head of Sgt. Justin Minisall, who sat to the right of Marrocco. The blast tore off both of Marrocco's arms and his left leg. His right leg was mangled beyond saving. His ceratoid artery was severed, his body badly burned, and vision in his left eye was severely damaged.

Minisall's leg appeared broken and the left side of his body was sprayed with shrapnel. Cpl. Mike Anaya, temporarily trapped in the gunner's turret, bled profusely from multiple wounds. The pressure from the explosion also blew the back doors off of the MRAP, but Pvt. Jacobee Johnson, the fourth man in the vehicle, was unharmed. He jumped out to provide security, then helped triage for the wounded. "Johnson was a major part in assisting us," Kilcoyne says.

When Lt. Kilcoyne reached the vehicle, Anaya had been untangled from the gunner's turret and was being treated by Medic Matthew Kenney. Kilcoyne and his Iraqi interpreter pulled Marrocco from the vehicle, put a tourniquet on his left arm and patched up the other points of amputation. "He was pretty burned up," Kilcoyne says.

Minisall, meanwhile, pulled himself out of the MRAP and moved to one of the other trucks. When Kilcoyne and his other men when to check on Minisall, he turned them away. "As injured as he was, he sat there and took it," Kilcoyne says. "He told us to concentrate on the more seriously wounded - Anaya and Marrocco."

Brendan Marrocco remembers the medic treating him during those frantic minutes. "He did as much as he could do," Brendan says. "Then he gave me morphine to make me comfortable. At that point, it could have gone either way. It was up in the air."

When the medevac helicopter arrived, Anaya was no longer responding to first aid. He had lost too much blood. Brendan was still hanging on. "It was a good sign for us," Kilcoyne says.

Still, the men wondered if two of their platoon would die in the wee hours of Easter Sunday. "When they said (Brendan) was alive, I was surprised," Kilcoyne said.

Anaya, Marrocco and Minisall were airlifted to the trauma hospital at Contingency Operating Base Speicher, outside Tikrit. Soon after the medevac helicopter delivered the wounded, the call went out to wake the soldiers stationed at Speicher, asking them to roll up their sleeves for a massive emergency blood drive. Brendan would need as many as 60 pints before leaving Iraq.

"It was going out as soon as they were putting it in," says his brother, Michael.