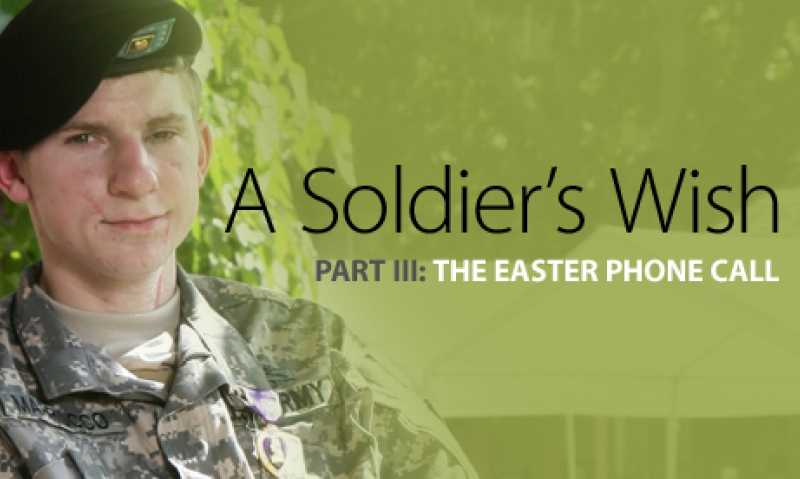 Alex Marrocco hung up on the first person who called his phone at about noon, Easter Sunday. He thought it was a telemarketer. Thirty seconds later, it rang again. On the other end was a U.S. Army major from Schofield Barracks, Hawaii.

“I’m sorry to tell you, Brendan has been involved in an explosion,” the major said when Alex demanded to know what happened to his son. “He lost his legs. He lost both his arms.”

The elder Marrocco’s knees buckled, and he dropped to the kitchen floor of his Staten Island, N.Y., home.

When Mike Marrocco – Brendan’s brother – heard his father scream, he ran downstairs and grabbed the phone. The Army representative repeated the news. “I kept it together until I realized what had happened,” Mike says.

Brendan’s mother was attending Easter Mass when the Army first tried to reach her. She listened to the voicemail as she sat in her car after church. “It said I needed to call the Department of Defense,” Michelle Marrocco remembers. “I started to shake. It couldn’t be good.

“When they told me about his wounds, I thought, ‘How much worse can it be?’” says Michelle, a nurse who deals with severely debilitated patients at the home health-care agency she manages. “Four amputations. His carotid artery severed. The vision in his left eye... All I kept seeing was a head and a torso.”

In the hours after an armor-piercing roadside bomb ripped through the vehicle he was driving, Brendan Marrocco had been flown from the battlefield to hospitals near Tikrit, then Balad, and finally on to Landstuhl Regional Medical Center in Germany.

Michelle called the intensive care unit at Landsthul. The nurse held the phone up to Brendan’s ear. He listened but could not speak. The nurse told Michelle that Brendan was mouthing the words, mamma, mamma. She broke down in tears. “We’re coming,” she reassured Brendan. “We’re coming.”

Alex and Michelle immediately flew to Germany. “I had to go see him,” Michelle says.
Brendan was attached to six IVs and other medical equipment, and his face was burned. Still, seeing him made Michelle feel better. The bomb had severely injured Brendan and, ironically, helped save his life. The explosion blew off three of his limbs and mangled his right leg beyond repair, yet was so hot that it also cauterized most of his wounds.

“It is a testimony to his medic and our medical professionals that he is alive,” says Jim Balkcom, a civilian aide to the Secretary of the Army, who first contacted The American Legion about Brendan and his desire to be standing on the tarmac to greet his unit when it returned from Iraq.

Brendan is well aware of the peril he faced. He later told his mother, “You know I shouldn’t be alive.”

“It’s an emotional roller coaster,” adds Alex, who is an engineer for an oil company.

“I’m glad that he’s alive. As a father, when I look at him, I can only imagine how difficult his future is going to be. You don’t want that for your child.”

Three days after the attack, Brendan arrived at Walter Reed Army Medical Center’s ICU. By early June, Mike had quit his computer job with Citibank in Manhattan and moved to Walter Reed to live with his brother and assume the role of his non-medical attendant. Today, they live in outpatient quarters on the hospital grounds.

“It wasn’t a decision at all,” says Mike, 26, who is three years older than Brendan. “It wasn’t something I thought about that much. It was something that needed to be done.”

Mike and Brendan were close growing up in a suburban Staten Island neighborhood. They played kickball in the schoolyard with the neighbor kids and attended each other’s soccer games. They played video games, and they went camping with the Boy Scouts each summer on the Ten Mile River in Pennsylvania, both achieving the rank of Life Scout. Brendan was the archery star – hitting the bull’s eye with an arrow and then splitting that arrow with a second shot, like Robin Hood. He did that twice, Mike says.

Brendan remembers those days fondly. “We would go out and have a blast in the woods and learn a whole lot. And we played manhunt – which is almost like an Army game.”

Their interests took them different directions after high school. Mike went to Rutgers University and earned his degree in computer information systems. Before joining the Army, Brendan tried college for a couple of semesters, then earned his certification as an auto mechanic and worked for a Brooklyn Subaru dealer.

Mike has no regrets about leaving Wall Street for Walter Reed. “It’s pretty nice to have a front-row seat to everything (Brendan) is doing. Unlike a billion-dollar company, you can actually see the results of what you are working for. You feel good about yourself at the end of the day.”

Brendan is grateful to have his brother as roommate, patient advocate and scheduling assistant. “It’s great having him to help out, to be part of my rehabilitation,” Brendan says. “It’s made things a lot easier for me. (And) I think it makes me want to do better.”

Alex and Michelle, who are divorced, take turns making the 200-mile drive to Walter Reed on the weekends, giving Mike a break and staying through Monday evening to consult with the medical team.

“I want to go to therapy with him,” Michelle says. “I want to meet with his doctors. I want to see him walking. I want to know what his physical therapy plan is.”

As Alex puts it, “This is what I can only describe as a family tragedy. And Brendan’s recovery is being dealt with as a family. Every one of us is there.”

“Having the support, being able to see them, being able to talk to them, definitely makes the recovery easier. Whenever I have a bad day, they are always willing to sit down and talk.”