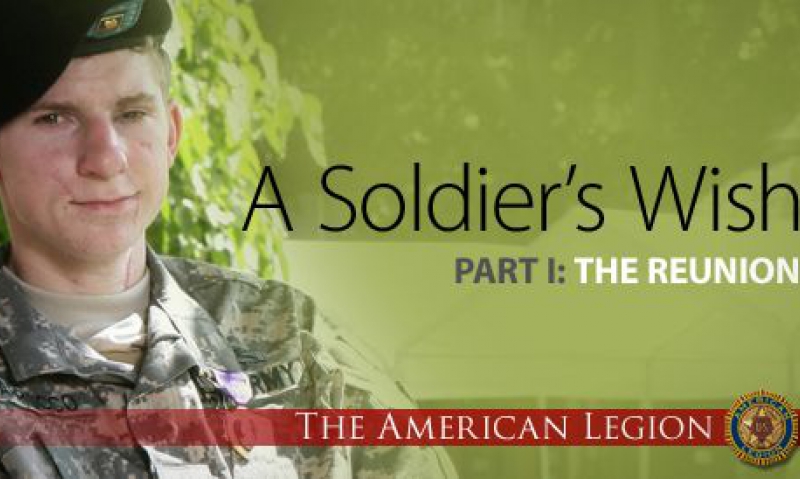 Days after losing his limbs in an Easter Sunday roadside bomb attack, 22-year-old infantryman Brendan Marrocco told his medical team at Walter Reed Army Medical Center he had one goal: to walk under his own power by the time his combat infantry brigade returned from Iraq.

Such a goal seemed impossible. Two weeks earlier, an armor-piercing roadside bomb had blown off both of the New York soldier’s arms and his left leg. His right leg was mangled beyond repair. His body was severely burned, and one of his eyes was seriously damaged in the enemy attack. His mother, a nurse, couldn’t picture Brendan standing, much less walking, in a matter of six months, when the 27th Infantry Regiment was scheduled to return to the United States. It was hard to believe the private first class had survived at all. “I had a hard time processing this,” Michelle Marrocco remembered of the moment she learned of her son’s goal. “But if that’s what he needed to get going ....”

Yet when the 2nd Battalion of the 27th Infantry Regiment came home to Schofield Barracks, Hawaii, Brendan was standing, walking and saluting his fellow soldiers.
“People genuinely marvel at his resiliency,” said Brendan’s father, Alex, who joined other family members in accompanying Brendan to Hawaii for his American Legion-assisted reunion in mid-November. “They saw him at his worst. To see him go from that condition to where he is today has to be extraordinary.”

Lt. Rich Kilcoyne, Brendan’s platoon leader in Iraq, puts it this way: “Everyone who meets him – they are in awe of him. He inspires them.”

This courageous soldier inspired The American Legion, as well, which went to work on his behalf after learning his wish. The Legion reached out to Mercy Medical Airlift, American Airlines, the Hilton Hawaiian Village, Helping Hands for Freedom and, of course, members of the organization. They, along with a rental car company that has asked to remain anonymous, helped make it possible for Brendan, his brother Michael, and his parents to spend 11 days with the soldiers and families of 2nd Platoon, Alpha Company and the entire 2nd Battalion. The American Legion’s Operation Comfort Warriors program covered lodging expenses for the family in Hawaii.

Hawaiian Homecoming
Most of Brendan’s fellow soldiers had not seen him since he and two other badly wounded soldiers – Cpl. Michael Anaya and Sgt. Justin Minisall – were loaded into a helicopter 145 miles north of Baghdad. Many of Brendan’s comrades assumed he wouldn’t survive.

When Brendan arrived at the airport in Honolulu, he expected a few of his buddies would be there to meet him. Instead, his entire platoon plus several other soldiers from Alpha Company stood at the airport gate, along with the battalion commander and his wife and the Alpha Company commander. They greeted Brendan with a round of applause.

Uncertain how to put such a moment into words, the soldier simply said of the reunion: “It was great.” Later, he joined the 2nd Battalion for its early-morning 4-mile training run through Schofield Barracks, the Waianae Mountain Range hovering in the background. “My platoon pushed me the whole way in my wheelchair,” Brendan explained. “That was incredible. Not only did I get to see everybody, but we were able to have conversations and catch up.”

Brendan was standing and walking an hour later when Maj. Gen. Robert L. Caslen Jr., commander of the 25th Infantry Division, promoted him from private first class to specialist and praised him for his service. Brendan and his fellow soldiers of the post-9/11 generation volunteered for military service, knowing well they almost certainly would see combat. That is what sets them apart from the majority of their civilian peers, Caslen said.

Toward the end of the promotion ceremony, Brendan stepped to the microphone and shared a few words with the 2nd Battalion. That night, they celebrated with a luau that included the Marrocco family.

Alpha Company also gathered for a private memorial service for Anaya, who died from the injuries he received in the same roadside bomb attack that took Brendan’s limbs. Anaya’s mother had personalized Bibles for each member of the company; she and the corporal’s sister gave each of the approximately 100 members of the company one of the Bibles during the service.

“Cpl. Anaya was definitely the leader among his peers,” Kilcoyne said. “You could ask Anaya to do anything. And a lot of younger soldiers would go to him for advice. I could not say enough about him.”

The reunion was capped by a redeployment ceremony for Brendan’s brigade and a Purple Heart ceremony. Brendan’s father was struck by the unfurling of the flags and sharing the moment with families of other Purple Heart recipients, “I didn’t realize there were that many soldiers injured.” Following the ceremony, Alex Marracco presented Carmelo Anaya an Honor and Remember flag, in recognition of his fallen son.

For the Marrocco family, the journey to Hawaii was about more than the ceremonies, memorials or even the fulfillment of Brendan’s wish. It was a chance to meet and thank the soldiers directly responsible for saving his life.
“If those three people, Lt. Kilcoyne, the medic – Matthew Kenney – and their Iraqi interpreter had not done what they did, I don’t think Brendan would have survived,” Alex said.

Healing, Looking Ahead
As the reunion drew to a close, Brendan’s unit took a hard-earned leave before beginning training for its next mission. Minisall, who is enduring his own difficult healing in a Warrior Transition Unit after two combat tours in Iraq, hopes to recover to the point where he can rejoin 2nd Platoon.

Brendan and his family, meanwhile, headed back to Walter Reed and months of rehabilitation. A few days after the reunion with his outfit, Brendan underwent his 13th surgery, another arduous step in his journey from the brutal attack 145 miles north of Baghdad to Schofield Barracks and his life ahead.

“He is in pain everyday,” his father said. “And yet, he tries to do more than is asked of him every day.”