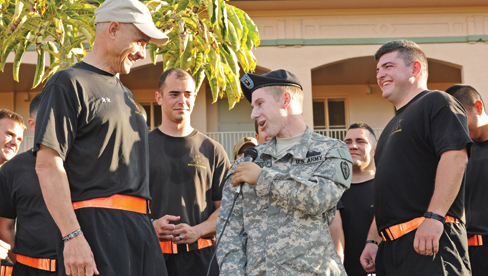 Fresh off a week of skiing the champagne powder of Aspen, Colo., Brendan Marrocco is already making arrangements to have a snowboard custom built so he can return to the slopes before the season ends. He’s engaged to be married. He’s thinking about the automotive business he wants to open when he leaves Walter Reed Army Medical Center in Washington. He’s got parachuting, bungee jumping, hiking, biking and all kinds of adventures in mind.

In other words, the 23-year-old soldier from Staten Island, N.Y., is doing everything he would have ordinarily done if an armor-piercing roadside bomb hadn’t taken his arms and legs, severed his ceratoid artery and damaged his left eye as he and a small contingent of soldiers returned from a night mission in northern Iraq last Easter.

“The progress he’s made is remarkable,” says Alex Marrocco, Brendan’s father. “I never thought he’d be at this point this quickly.”

Brendan also is surprised. “It is truly incredible that the body can heal as quickly as it does,” he says. He credits his amazing pace of recovery to two things: unwavering family support and expert care from the medical staff at Walter Reed. “My surgeon is not only an amazing surgeon; he looks out for me.”

The combat veteran has lost track of the number of operations he has had since getting hit. His 13th or 14th came after he returned from an American Legion-assisted trip to Hawaii in November, when he welcomed home his brigade. It had been his wish almost from the day he resumed consciousness to stand and salute the soldiers with whom he served.

Soon after he returned from the reunion at Schofield Barracks in Hawaii, Marrocco underwent surgery to remove bone growth in his left leg, caused by the limb’s attempt to heal itself, Brendan explains. Removing the growth has made walking far less painful.

There will be more operations on his arms and legs. There’s shrapnel to remove from his forehead. And while his family says the surgeries take their toll, Brendan approaches them with humor.

“I’m starting to like them,” he says. “With each one, I get better. They fix things. (And) I get to sit in a hospital, and people wait on me. The only thing I won’t do – I won’t get my wisdom teeth pulled… I don’t like getting that shot in my mouth.” He grins. For a moment, he can make you believe a shot of Novocain is the most painful thing he can imagine.

“I think his sense of humor goes a long way to making a situation better,” his father says. “At times, we find ourselves laughing at the stupidest things.”

That approach has carried Brendan throughout his recovery, throughout the challenge of learning to walk again, of mastering different sets of prosthetic arms and legs, of dealing with unending pain.

“He has a lot of fun during his day,” says Michael Marrocco, Brendan’s older brother and non-medical attendant.

And occupational therapy. “I’m pretty much past ‘move this block’ – the silly stuff. Now I’m into the stuff you do every day.”

And planning his future.

Brendan met his fianceé, Katie Barto, last July while on a beach outing at Breezy Point, N.Y., arranged by the Military Advanced Training Center at Walter Reed. Barto was an intern with Disabled Sports USA. The couple became engaged just before Brendan and Michael went home to Staten Island for 18 days at Christmas.

In January, the brothers headed to Snowmass Ski Area in Colorado, where Brendan mastered a bi-ski – essentially a seat attached to a pair of skis that is guided by both outriggers attached to his arms and Brendan shifting his weight. Michael joined him on a snowboard. The outing was reminiscent of their boyhood ski trips to Pennsylvania. They attended the Winter X Games in Colorado, and Brendan gave out medals to the top mono skiers. Challenge Aspen, which arranged the trip, is “an amazing program,” Brendan says. “And Aspen was so beautiful. The view was spectacular.”

In typical fashion, he didn’t hold back. “I was skiing very fast,” he says with an easy smile. “Anything that could be potentially dangerous to my health, I’m all over.”

He’s loved fast cars and motorcycles since he was old enough to drive. He modified a Subaru WRX and pushed it to 160 mph before he sold it and joined the Army in 2008. He’s now modifying a 2006 Dodge Charger SRT8 with a 425-horsepower Hemi under the hood. His friends were working on it when he was home for Christmas. Next up: installing headers and getting tires to fit the new rims he bought.

It’s all about focusing forward.

“He doesn’t want to be looked at in terms of his injuries,” his father says. “He wants to be defined for the person he was and who he really is now. He’s a man with a great sense of humor who has always done things for himself and wants to continue doing them for himself.

That approach – that attitude – helps others as well. “People who have never met us tell us it changed them,” says Brendan’s mother, Michelle. “I believe it’s going to be for the better of all of us. I look at him, and I never have a bad day.”

Brendan will leave Walter Reed at an undetermined date in the future. It’s unclear what level of independence he will have, his father says. “To me, that is the biggest and most troubling unknown. My gut feeling is he will have enough independence that he will be able to live on his own. Recently he told me, ‘Don’t take this personal, Dad, but I’m not going to live with you for the rest of my life.’ How’s that for positive thinking?”

Michael, who left an information-technology job with a large banking company to help Brendan, hasn’t decided what’s next for him. “I have no idea what kind of job I’ll go back into,” he says. His focus, for the moment, is caring for his brother.

“Michael remains our family’s hero,” his mother says. “He saved us.”

No matter where he goes from here, Brendan also leaves an indelible mark on Walter Reed, the Army and everyone he has encountered. It’s obvious just watching the ease with which he interacts with the steady stream of soldiers and civilians who seek him out in the lobby of Mologne House, a hotel at Walter Reed that houses outpatients and their families.

“He is such a positive influence on those around him,” says Command Sgt. Maj. Jeff Mellinger, Army Materiel Command. “You cannot help but feel better after spending time with him.”

Brendan, meanwhile, pushes the spotlight onto the other men and women who are recovering at Walter Reed. “Pretty much everyone laid up here wants to get back to Iraq and Afghanistan,” he says. “They just want to continue to do their jobs on a daily basis. They just want to help.”