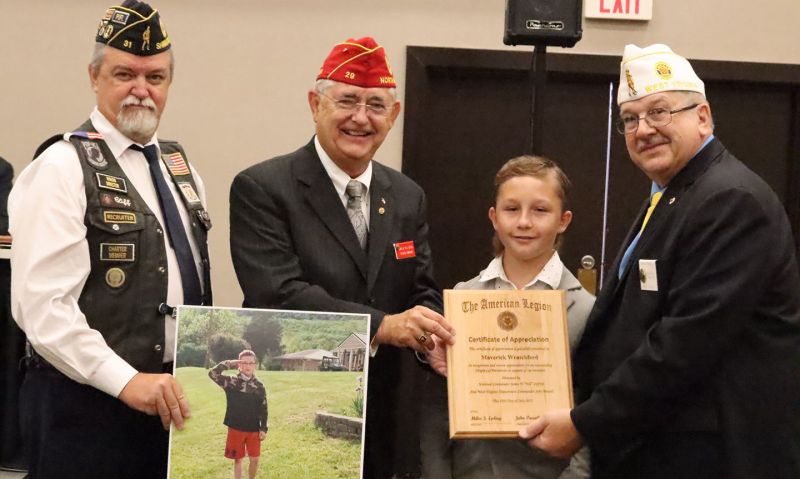 Maverick Wratchford had plans of joining the U.S. Army, following in the footsteps of both his father and older brother. But this plans were derailed when Wratchford was in a utility terrain vehicle accident that severely injured his kidney and disqualified him from future military service.

That disappointment didn’t cause Wratchford’s love or respect for the military or veterans to wane. Now 12, his respect was on full display during May’s inaugural West Virginia Legacy Run.

As the dozens of American Legion Riders passed by his house, Wratchford stood at attention and rendered a hand salute until the entire contingent had passed him.

It was a gesture that moved immediate Past Department Commander John Powell, whose idea it was to stage a state ride.

“It touched a lot of people,” said Powell, a member of Post 1 in Wheeling and a charter member of the Upper High Valley American Legion Riders. “I sent a message out and said ‘please, somebody tell me … that we got a picture of that.’ Everybody replied – it was like Maverick represented a way of hope that many Americans think is lost.”

Maverick’s father, Steve Wratchford Jr., is the commander of American Legion Post 78 in Petersburg, W.Va., and currently is the chief deputy of the Grant County Sheriff’s Department, which provided an escort to the Legion Riders during the state Legacy Run.

Steve has stressed a respect for the military and veterans to Maverick since a young age. “We’ve always been a military family,” he said. “He had saw some guys saluting the flag that were veterans, and I told him ‘yes, we salute the flag at all times.’ And said ‘but when you give that same salute to a veteran … you’ll see the reaction you get from that veteran.’ It’s a sign of high respect.”

Steve believes Maverick waited 20-25 minutes for the Riders to come by his house and was told his son held it until the last motorcycle had passed. “He didn’t think anything of it,” Steve said. “He didn’t realize how many veterans he had touched. He was proud of that.”

Powell wanted to do something special for Maverick, so he arranged to have the young man honored at the department convention in Huntington on July 11. American Legion National Commander James W. “Bill” Oxford was on hand at the convention with Powell, where Maverick was presented with challenge coins, pins and a plaque. Maverick also was given a year’s membership in Sons of The American Legion Squadron 78.

“I just thought that he took the extra effort to salute (the ride), and I wanted to give him some recognition,” Powell said. “I guess the story touched me.”

Being honored at the convention was a memorable experience for Steve and Maverick. “It meant more than anything. It was very touching,” Steve said. “I told (Maverick) how big it had gotten, and he didn’t realize it until … we walked in the doors and I was going to introduce him. I didn’t have to. Every person there knew his name. They all came up to him and hugged him. They were crying. They thanked him for what he had done for him.

“It’s really sparked even more in him … just the level of what’s happened and how he touched people. It’s just really amazing.”

Save
Tags: Legion Riders, Sons of the Legion