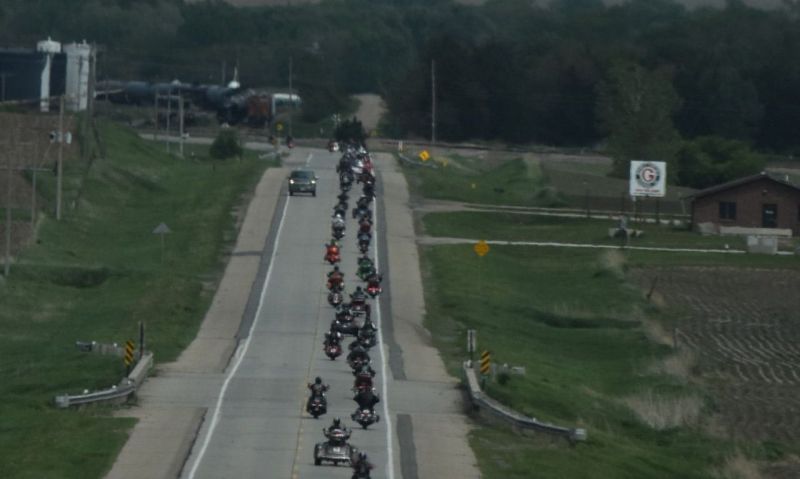 In mid-May of 2021, Nebraska Legionnaires Ken Hanel and Daryl Harrison traveled U.S. 20 on a 12-day, 432-mile trek across the state to honor Nebraska’s 74 Medal of Honor recipients and continue to raise awareness for the campaign to rename U.S. 20 from Oregon to Massachusetts as the federal Medal of Honor Highway.

When the pair concluded their journey at Siouxland Freedom Park in South Sioux City, Neb., a contingent of motorcyclists largely made up of Nebraska American Legion Riders – but including some from as far away as Wyoming and South Dakota – were there to provide the pair with a flag line. The Riders had traveled across the same highway that day, carrying the Medal of Honor flag with them.

Many of those same Riders will again travel U.S. 20 later this month, riding from Wyoming to Iowa to honor the state’s Medal of Honor recipients and then to join up with other Legion Riders from Iowa and surrounding states to take part in “Thunder on the Missouri,” a three-day event staged similar to the former national Rolling Thunder Memorial Day Weekend.

The two-day Nebraska Medal of Honor Highway 20 Thunder Run will leave Van Tassell, Wyo., on May 27 and finish up in Sioux City the next day for a program, before joining with “Thunder on the Missouri” participants to take part in their events, including a trip to the Vietnam War Memorial in Freedom Park.

“Last year when we got to South Sioux City we had 239 bikes,” said Walton, a past state liaison for Nebraska’s American Legion Riders and current Western Area vice commander for the Sons. “That wasn’t strictly American Legion Riders. There were also some Patriot Guard (Riders) and whoever else who wanted to ride for the cause. This year is going to be bigger. We’ll have a lot of bikes.”

After leaving the Wyoming-Nebraska border, the Medal of Honor Highway 20 Thunder Run will make a stop in Gordon for an unveiling of Post 34’s new Medal of Honor plaque that honors all of the state’s 74 Medal of Honor recipients. The ride will stay the night in Valentine, make a lunch stop the next day in Valentine before arriving in South Sioux City.

There, ride participants will take part in a Nebraska Medal of Honor Foundation ceremony honoring Nebraska native and Medal of Honor recipient Charles Hagemeister. The Vietnam War Army veteran was scheduled to be at Siouxland Freedom Park in 2021 for the arrival of the Hanel and Harrison, but he passed away three days before the conclusion of their walk.

Walton said staging the two-day ride is part of the American Legion Riders’ “way of giving back. That’s what we do. We honor veterans in any way possible.”

Save
Tags: Legion Riders, Honor & Remembrance, Sons of the Legion