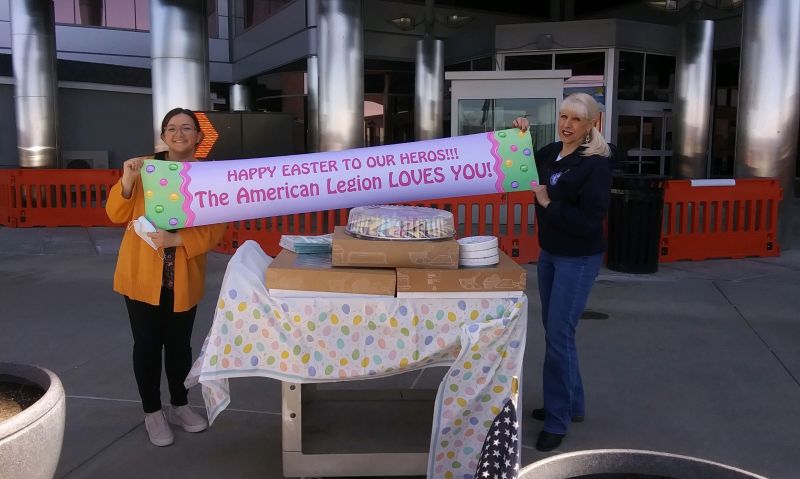 When the nation began to shut down in early spring 2020 because of the coronavirus pandemic, it became clear to members of The American Legion Department of Pennsylvania’s District 12 that the support they’d provided for years to the Department of Veterans Affairs patients and residents at the Wilkes-Barre VA Medical Center was going to have to change.

And so District 12’s efforts changed, using an adapt and overcome mentality to remind those veterans at the facility they are not forgotten. The district has found COVID-safe ways to help the facility celebrate such holidays as Christmas and New Year's Eve, the Fourth of July, Veterans Day, Memorial Day and Father’s Day.

And on April 3, the district provided those same veterans with some treats to celebrate Easter – the first holiday District 12 had to cancel last year due to the pandemic.

“It was so shut down you couldn’t send food,” said District 12 Canteen Fund Representative Nicole Guest, a member of American Legion Post 350 in Nanticoke. “It was so crazy, because no one knew (the severity of COVID-19).”

District 12 purchased strawberry-filled cupcakes from Schiels Family Market, which Guest said has provided food for similar efforts for years “pretty much at cost” or sometimes free. Cookies also were purchased, and a personalized banner made that read “HAPPY EASTER TO OUR HEROES!!! The American Legion LOVE YOU!” that was hung in the dining hall. The district also sent over balloons and a tablecloth, with matching plates and napkins.

“They’re allowing no more than 10 in the dining room at a time. But to know that banner was up and they were all able to be together with their comrades and eat the cupcakes and eat the cookies – I wish we were in there. It’s heartbreaking, because it’s now been past a year that we’ve been in (the facility). But they knew, with the banner and the cupcakes, that we’re there for them.”

While being able to find a way to honor the VAMC’s veterans has been uplifting to District 12’s American Legion Family, Guest said they’re ready to go back to honoring those veterans in person.

“We are all praying that this is going to happen soon, even if it’s only a couple of volunteers,” she said. “I don’t think it’s going to happen soon where we’re allowed to have a big party. But what our prayer is that in the next couple months, as everybody does get vaccinated more and more, that we are able to have a couple of volunteers … at least go in and visit with them. That’s our prayer: to just go in and see them.”

In the meantime, District 12 will continue its current efforts. “We’ve been sending something in there every month,” Guest said. “They know the American Legion Family isn’t going anywhere. We literally are their family. Not just The American Legion, but the other organizations … that go in. There’s a good bond here.”

Whether it was bringing back Easter events, continuing to provide food assistance or opening post doors to those in need of COVID-19 vaccinations, American Legion Family members continue to think of community during the pandemic. The following are a few examples. Please remember to share what your post or your Legion Family members are doing at www.legiontown.org.

In Mountain Home, a food pantry opened by Alley-White American Legion Post 52 in March continues to provide essentials to veteran and military families on a weekly basis. Veterans, military personnel or a designated representative may receive food once a calendar month. No income information is required to participate.

American Legion Post 790 in West Covina has continued its collaboration with the VA Greater Los Angeles Healthcare System, hosting another COVID-19 vaccination clinic similar to one that took place in March. https://www.legion.org/veteranshealthcare/251993/veterans-vaccinated-la-...

Some veterans who used the clinic took to social media to praise. Tom Riordan tweeted out “Thank you to Los Angeles @DeptVetAffairs and West Covina @AmericanLegion! Got my second covid shot today. Actually tweeting from the post shot waiting room.”

And U.S. Air Force veteran James Sims shared his experience via Twitter, posting “So many emotions. Mostly relief. And hope. Got my second Pfizer shot today. Fully vaccinated, thanks for the @DeptVetAffairs and @AmericanLegion.”

Miami Post 156 in Paola kept an annual tradition going, putting on its 89th annual Easter egg hunt on April 3. Last year’s event was canceled because of the pandemic – the first cancellation in the event’s history.

The egg hunt is open to children in fourth grade and younger; after the eggs are collected, they are turned in at Post 156 for a sack of treats.

In Haverhill, American Legion Post 4 joined with other veterans service organizations to deliver more than 250 Easter meals to veterans and their families. The meals included baked ham, green beans and macaroni and cheese, and were delivered the day before Easter in microwavable containers

Free meals of baked ham, mac and cheese and green beans were packaged in microwavable containers and delivered Saturday in time to be reheated for Easter Sunday. Easter cards were donated by Whittier Regional Vocational Technical High School students and local businesses.

Kurbel also received a salute from the Legion Riders.

“Seeing all this for him, it’s hard not to get emotional. It’s pretty cool,” Kurbel’s son Larry told the Press & Guide.

In Brewster, American Legion Post 464 is hosting a COVID-19 vaccine clinic on April 8 in collaboration with Nobles County Public Health.

In Rockingham, COVID-19 halted the 2020 American Legion Post 147 annual Easter egg hunt, believed to be the first break in the event in around 60 years. But this year’s event brought back a crowd of children hunting eggs and being treated to soda and ice cream.

The 360 hard-boiled eggs are decorated by members of Post 147 and hidden on Post 147’s property along Ledbetter Lake.

“It’s a win for us, for the community,” Post 147 Commander Wayne Johnson told Your Daily Journal. “We’re basically starting over just like a lot of organizations are. Hopefully this year will be better.”

• In Orwell, American Legion Post 719 conducted its 70th annual conducted its 70th annual community egg hunt after having to scale back the 2020 event because of the pandemic. The egg hunt was broken down into age groups and included 2,400 eggs. Prizes were given to the children who found the gold egg and the most egg in each category. The Easter Bunny also showed up to greet the children and pose for pictures. "We do it for the kids,” Post 719 Commander Gary Morris told the Star Beacon. “The American Legion is a service organization.”

• Members of American Legion Post 479 in Swanton organized a drive-by birthday parade to honor World War II veteran Marion E. Lehman on his 100th birthday. Lehman and members of his family sat outside his home as a members of the community drove by to wish him a happy birthday.

In Piedmont, American Legion Auxiliary Unit 311 brought the city’s annual egg hunt back after a one-year hiatus. In addition to the egg hunt, children also got prizes and stuffed animals.

“This year, we’re really excited about the nice weather and the number of kids that we have showing up,” Department of South Dakota Auxiliary Parliamentarian Kim Anderson, a member of Unit 311, told Newscenter 1. “It’s just wonderful. We usually plan on about 100 and it looks like we might have more than that this year.”

In Wausau, Girl Scout Natalie Lipowski sold a personal-best 673 boxes of Girl Scout cookies this year, thanks in part to Montgomery-Plant-Dudley Post 10. The post purchased 100 boxes of cookies to distribute to through its meals for veterans programs.

In the past year, Post 10 has been a part of an effort that has delivered 2,000 meals to area veterans to the safety of their residence. Through June, the post will deliver two meals to 100 veterans monthly.

In Gillette, American Legion Post 42’s Easter Eggstravaganza drew hundreds of children and their families. The post had two egg hunts – one for children ages 5 and under, and another children ages 6-10.

A carnival took place as well and included a photo booth with the Easter Bunny, a fishing pond and duck pond, fish races, a cake walk, a craft booth and sack races.