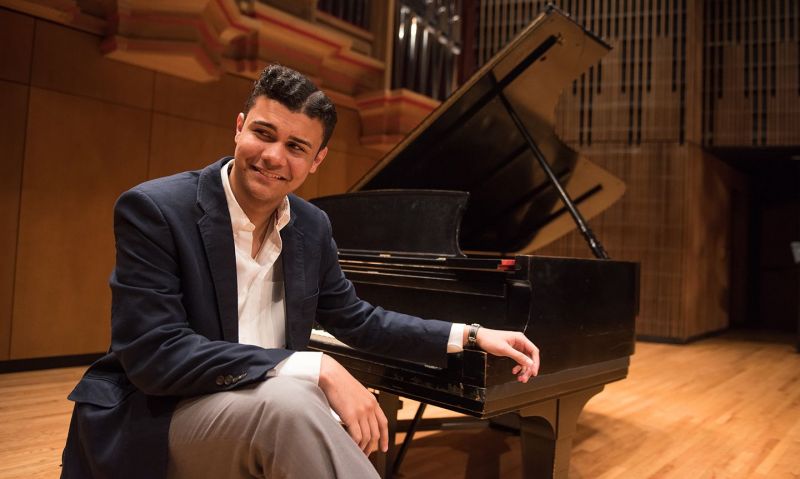 “We are a species of story-tellers,” Anighya Crocker said as a guest on The American Legion’s Tango Alpha Lima podcast in 2020. “We like to tell stories. We like to have good stories told to us. We learn from our stories. We bond through our stories.”

Crocker, the 2016 American Legion Boys Nation president, and his fellow presidents told their stories in a variety of ways over the past decade. As Boys Nation, cancelled in 2020 due to the COVID-19 pandemic, prepares to meet for the 75th time, this series of stories looking at the program’s history concludes with the stories told in the 2010s.

After his victory in the 2010 Boys Nation presidential election, Charlie Brown of Avon Park, Fla. expressed his gratitude for the faith his fellow senators showed him.

“I would also like to say congratulations to my opponent (Robert Fisher of Clarksville, Tenn.); he ran an excellent campaign. I’m humbled and so happy, and now I’m ready to unite Boys Nation,” Brown said.

Brown echoed that message of unity in his speech at the 2010 American Legion National Convention in Milwaukee.

“When attending (Boys) Nation you have two from every state and so you get all the different ideas and ideologies. You see the liberal side and the conservative view and all the different walks of life. They separated us and brought us together at the same time because we had to build party platforms together. And I think if Congress and different branches of our government would come and watch our experience of Boys Nation, I think they would do a better job for the country,” he said.

“This program is second to none as far as civics, government and service to country go,” 2011 Boys Nation president Michael Herbert of Arvada, Colo., said shortly after his election. “It’s very exciting to be the leader of this program, to be the president.”

Speaking at the 2011 American Legion National Convention in Minneapolis, Herbert said that through the Boys Nation program, “The American Legion has guaranteed that our nation’s finest young leaders will be willing to serve America in the future.

“I assure you the importance of country instilled by your program has not been taken for granted. Already I have reinstated the Pledge of Allegiance at my school to ensure this nation is afforded the respect she deserves, and going forward I will not relent in doing whatever is necessary to guarantee the success of our union, as you have all done before me,” he added.

The 2012 Boys Nation presidential election between Jonathan Hess of Tuscaloosa, Ala., and Michael Richard of Fitchburg, Mass., came down to the final votes.

As part of the election process, the two senators from each state come forward and announce their respective votes for each office. When Wyoming’s senators stepped up to announce the final votes, Hess was leading Richard by two votes. A potential tie, to be decided by a coin toss, was looming.

“As the votes were getting close, we shook hands and Michael said, ‘You know, it’s a really tight race,’” Hess said after winning the narrow election. “I didn’t know how close the race would really be. It’s just incredible.”

“You can’t go wrong killing them with kindness,” Simeon Toronto of Andover, Minn., said after being elected president of Boys Nation in 2013. “It’s a lost art in this world of dirty campaigns and people disrespecting each other. Kindness is just refreshing.”

Character was a key component of Toronto’s campaign, a lesson he said he learned from his mother — “if you want to do anything successfully, don’t care about yourself — care about others.”

In his speech at the 2013 American Legion National Convention in Houston, Toronto said he “tried to see each senator as not conservative or liberal but simply as American.

“At times I had to stand up for what I believed was right, even when I was in the minority,” he said. “It is my hope that compromise, civility, and integrity will return to the democratic process.”

Matthew Ellow of Lacey’s Spring, Ala., wasn’t very confident after his presidential debate against Joshua Cook of Knoxville, Tenn., at Boys Nation 2014.

“Josh Cook was obviously more knowledgeable and clearly better at speaking in a situation such as that, and in addressing the rules of the debate … 99 percent of the time the winner of the debate wins the election,” Ellow said.

This time, though, it was Ellow emerging victorious, by a 52-46 count.

Ellow was humbled by the thought that some “of the brightest, most brilliant, most creative, overwhelmingly intelligent minds in the United States vested in me their confidence to lead them to a better America.”

“I think everyone there, and the 97 other boys would be able to tell you that you come out of that week much different than when you came in,” 2015 Boys Nation president Aravind Byju of Tampa, Fla., said in 2016. “… Just kind of getting that humbling experience and realizing that you can still fit in and broaden your horizons by meeting people, that was probably what I took out of it the most.”

Byju credited his roommate at Boys Nation, Steve Lowry of Arkansas, for encouraging him to run for president.

“He said, ‘Hey, man, you don’t want to be flying home on that plane and thinking, Oh, I wish I did that.’ And it was that advice to put it all out there that really stuck with me, this is a once-in-a-lifetime opportunity, and I owe it to myself and I owe it to everyone else that was fighting to get this position to at least put my all into the program,” Byju said.

“You see, you get out what you put in: hard work, honesty, good citizenship and a love of country and fellow man is the best and most efficient way to shape your country, and previous to Boys Nation, I thought that the best way to shape policy was by going to the ballot box … running for office is as easy as picking up the paperwork. Anybody can get involved. And while some might say that’s a scary thing, that’s the beauty of this democracy we live in. Anybody can be anything.

“I was actually doubting myself for a little bit,” Darius Thomas of Phenix City, Ala., admitted following his election as Boys Nation president in 2017. “But I ended up deciding to run the day before, for the nomination, and I drafted a speech that night, I wrote what my heart was telling me to write. It worked out in the end.”

Reflecting on that a year later, Thomas said the experience helped him confront his self-doubts.

“You can compete at a high level if you’re genuine, you’re passionate, you care about it,” Thomas said.

For Joshua Cheadle of Newport Coast, Calif., his election to president of Boys Nation in 2018 was more about what he could do for his fellow senators than any personal accomplishment.

“What I’m trying to achieve is not what I want to do, it’s making sure that everyone else can do what they want to do and that’s helping them pass their legislation, talking to them, and just making sure that everything’s passed, everything’s done with honor, with integrity and we do it to the best of our abilities,” he said. “Make this a memorable experience not because this is Boys Nation but because of what we accomplish at Boys Nation.”

“It was so odd to me that a bunch of 17-year-olds could bond over a bunch of simple things in a week,” Lou Acevedo of Gardner, Mass., said of his experience at Massachusetts Boys State.

“But Boys State seems so much smaller now. It’s so different now seeing some of the bonds I’ve made here,” added Acevedo, the president of Boys Nation 2019.

In his closing speech at the 2019 Boys Nation graduation ceremony, Acevedo spoke about the bonds formed at the program.

“I think I speak for a lot of people when I say the fraternity here was amazing,” he said. “Last night, my section had some serious and really honest introspective conversations. It took a lot for some of us to say the things we did, it made a lot of us emotional.”

The 75th session of American Legion Boys Nation will take place July 23-30 at Marymount University in Arlington, Va. Follow the happenings at legion.org/boysnation and on social media on Twitter (@ALBoysNation) and Instagram (@theamericanlegion) with the hashtag #BoysNation75.

Catch up with our series on the history of Boys Nation:

·       Success at the state level leads to a national forum